Mutates infantry, whether allied or hostile into the owner's Brutes

Only 1 may be built at a time.

The Genetic Mutator was a weapon Yuri developed to bolster his own forces while simultaneously destroying enemy units.

The device could turn any infantry unit, Yuri's or the opponent's, into a mindless brute, by manipulating their DNA. Non-humanoid infantry units were instantaneously killed, as the mutation process was only designed to function on humans. Some of the software technology came from Massivesoft which Yuri blackmailed into writing a genetic software which presumably formed the basis of the weapon; due to the fact that in the original timeline he wasn't interrupted, it is probable that the pre-time travel version was even more powerful.

It took a long time to build up the energy necessary to turn such a huge amount of forces into brutes. Also, placing infantry into a vehicle or garrisoning a structure protected them from the Genetic Mutator's effects. For the same reason, it was completely ineffective against vehicles and structures, should it be used against them. The mutagenic energy burst seems to be focused at ground level, therefore, Rocketeers are also immune to its effect.

This weapon can turn even Boris and Tanya into brutes. The only way to stop it from happening is to garrison infantry into vehicles like the Flak Track and the IFV, or any garrisonable structure. However, for whatever reason, the weapon wasn't calibrated to work on non-humans. Giant squids, dolphins and attack dogs were immune to mutation, however in the process, they would die. Due to the psychic technology imbued to the weapon other brutes would be converted to whichever side exposing the mutator ray.

A counter for the Genetic Mutator is to reduce the usage of infantry (except rocketeers) or garrison them in available structures. This tactic is less favorable to the Allies, as they have superior infantry corps compared to the Soviets. To reduce damage, it is advised to place a small amount of infantry (ungarrisoned) near defensive structures, luring the enemy to fire at those, rather than more valuable targets. Spies are able to reset the weapon's timer or sabotage its power supply, providing a window during which to make an infantry assault.

AIs tend to use it on Slave Miners and clusters of infantry either friendly or hostile.

A good tactic is to target enemy infantry that groups(like GI, Guardian GI's) and destroy the defenses or structure easilly.

Genetic Mutator in action in the Yuri's Revenge loading screen

Blueprints for the Genetic mutator

Infantry affected by the Genetic Mutator 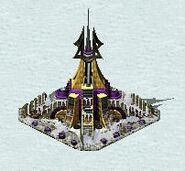 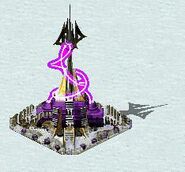 charged Genetic mutator in Snow Theater
Add an image to this gallery
Retrieved from "https://cnc.fandom.com/wiki/Genetic_mutator?oldid=237494"
Community content is available under CC-BY-SA unless otherwise noted.