War against the GLA
Germany is a country in west-central Europe. It is bordered on the north by the North Sea, Denmark, and the Baltic Sea; on the east by Poland and the Czech Republic; on the south by Austria and Switzerland; and on the west by France, Luxembourg, Belgium, and the Netherlands.

In the early 20th century, Germany was part of the Central Powers during World War One. Having lost the conflict, Germany was forced to sign a humiliating armistice that wrecked the nation's economy, causing hyperinflation. German confidence and power had been badly shaken. The loss of its colonies and its monarchy were grievous disasters resulting in a period of revolution and counter-revolution. During this borderline anarchistic time, two major political parties began to gain power: the National Socialist party, led by Adolf Hitler; and the Communist Party of Germany. The struggle between the two political parties weakened them both. After the failed Beer Hall putsch, Adolf Hitler, NSDAP's leader was incarcerated and the NSDAP started to fall apart. After he was released, he mysteriously disappeared altogether, leading to the collapse of the Nazi party.

With the NSDAP out of the picture, Germany has not devolved into a militaristic dictatorship, but a left-wing democracy, ultimately becoming a socialist nation.[1] At some point between 1924 and 1953, Germany also ceded East Prussia, Pomerania, Brandenburg east of the Oder, and Lower Silesia to Poland and the USSR.

Germany was a crucially important member of the Allies, contributing its well trained and equipped military to the Allied cause. In addition, one of its top military commanders, General Gunther von Esling, was appointed as the first Supreme Commander of the Allied Forces, while the German-born Jew Albert Einstein became one of the top researchers (and inventors) of the Allies.

When the USSR began its attack on Europe, Germany was one of the first countries to be hit by the invasion and was eventually overtaken by the Soviets, forcing the German military to retreat into France (Although, considering that they only had about 1 million soldiers with 3 tank divisions and were being attacked by about 5 million Soviet soldiers with 14 tank divisions, it's actually very impressive that they held out as long as they did.).

However, the Allied Forces under the lead of German General, Gunter von Esling, recoiled and pushed the enemy back, but not without help from Tanya Adams, a mercenary.

During the Allied campaign and briefing of Tanya's Tale, Berlin was saved under control of the Allies. Von Esling, the Supreme Allied Commander was happy to have his city and the whole of Germany liberated. Stavros was excited about that and he was still poorly affected by Stalin's invasion of Greece. When Tanya Adams got captured, he sent Field Commander A9 to his homeland and rescue her from Soviet torture.

By the Third World War, Germany had recovered and rebuilt. However it was not able to help the United States immediately, because the rebuilt Soviet Union had its nuclear missiles targeting the European Allies. After the Soviet missile base in Poland where two Nuclear Missile Silos were destroyed, they led their forces along with France to eliminate the Soviet bases in Poland and prepared for a strike to attack Russia.

But when Paris was attacked, the French withdrew their forces causing disorganization, making the attack impossible. Germany's most significant development during the war was providing the Allies with their Tank Destroyers. They also put America's leaders in contact with Dr. Albert Einstein so he could give them necessary aid in building a new Chronosphere, Mirage Tank, and Prism Technology.

In an attempt to destroy Einstein's laboratory in the Black Forest, located in southwestern Germany, the Soviets invaded Poland and then crossed the border to push towards the Black Forest. This resulted in the southern half of Germany being invaded by the Soviets, however Berlin and much of the north held out. The Soviet offensive thrust was decisively stopped in a large scale battle in the Black Forest by a talented Allied Commander from the US and simultaneously defended Einstein's lab. 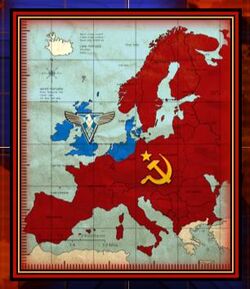 Germany is still apart of the Allies, it was invaded and majority of the country was taken over by the Soviet Union alongside most of Europe. Despite this, the north-western parts of the country still remained in Allied hands and it, alongside the Netherlands and Denmark was the only remaining Allied positions on Mainland Europe on the eve of the Soviet invasion of Great Britain. The failure of the invasion of Britain alongside being driven out of France forced the Soviets in Europe to go on the defensive.

The Soviets established a large Soviet HQ in Heidelberg, and constructed an Iron Curtain to defend it. Nevertheless, an Allied counter-offensive which involved the use of infiltration tactics and the use of air power in the form of Vindicator Bombers, liberated the city and drove the Soviets from Western Europe in no position to counter-attack the Allied forces.

Landsberg: A local town in Germany. In the old timeline, Adolf Hitler was imprisoned here after trying to rebel in Munich for supporting his parliamentary party back a year ago by storming a pub, somewhere in the city. Using a Chronosphere, Albert Einstein traveled from the United States in 1946 to this city back in twenty-two years ago. Adolf Hitler was released from imprisonment and met Einstein as a free man. After talking with each other, the latter shook hands with Hitler and assassinated him in the process.

Berlin: The capital city of Germany and a major command center for the Allies. This was where General Carville was headed to oversee Allied operations in Europe before he was assassinated. During the Third World War's second iteration, the leading Soviet scientist Gregor Zelinsky defected to this city.

Heidelberg: After being driven out of France; A large Soviet HQ was established here as the command center for operations in Western Europe. Allied Forces infiltrated and liberated the city from the Soviets.

Black Forest: Einstein's lab was stationed here. At first, the Allies defended the lab and then, the Soviets destroyed it. Was part of Mirage and Deja Vu.

Germany is a playable subfaction in Red Alert, Red Alert 2, and their expansion packs.

Germany is one of the 6 (3 in the original Red Alert) playable Allied countries. Its units and defenses deal 10% more damage.

Germany is one of the 5 playable Allied countries. It exclusively has access to the tank destroyer.

Judging from commented out lines in the rules.ini of Red Alert 2, Germany was meant to have veteran Grizzly tanks at one point during the development.

Germany continued to prosper after the war, becoming a prominent member of the Global Defence Initiative during the presidency of Helmut Bierman. Nod briefly occupied the country during the war, but was driven out shortly thereafter by GDI forces. Erich "Patch" Wulfe, a German soldier, was a member of Dead 6.

When the Sarajevo Temple of Nod was destroyed, intel was retrieved that stated that the Brandenburg Gate was to be destroyed by Nod.

During the Second Tiberium War fights occurred in the area around Hamburg where the chemical missile facility and prototype fighter factory were located.

Most of Germany was declared a Yellow Zone after TW2 until recently GDI scientists discovered a way to drive back Tiberium by means of sonic resonators. They were able to turn a small area back into a Blue Zone which was called "New Eden".

During the Third Tiberium War, New Eden came under particularly heavy attack from the Scrin invaders. GDI forces did eventually manage to drive the Scrin from Germany. Cities attacked include Munich, Cologne and Stuttgart.

The final phase of the War against the GLA takes place in Germany, starting with the attack on the European Central Command.