The Ghost Stalker (sometimes spelled as Ghoststalker) is a commando in Tiberian Sun. He is a mutant and the most powerful soldier of the Forgotten in the Second Tiberium War.

Other than being mutated by Tiberium at some point and his remarkable demolition skills, little is known about him. The main weapon of the Ghost Stalker is a railgun, a miniaturized version of railguns mounted on the Mammoth Mk. II. As a mutant, he is resistant to the radiation the weapon emitted that would otherwise kill an unprotected human operator. The gun is extremely powerful, capable of destroying most ground targets in no more a few shots.

Against structures, the Ghost Stalker uses C4 explosives that tear apart a building nearly instantaneously. However, the fact that he actually had to get to the building itself limits his effectiveness in this regard.

His lack of health when compared to Cyborgs and the Cyborg Commando means that a Medic is often necessary. In the absence of medical personnel, the Ghostalker can slowly regenerate his health by simply wading through a field of Tiberium crystals, as his mutant physiology absorbs the radiation the crystals emitted, triggering cellular regeneration that all mutants experience when in contact with Tiberium.

He also has some fire resistance as he can take a direct hit from the flames of a Devil's Tongue without bursting into flames.

The Ghost Stalker and his similar companions were deployed several times during the Second Tiberium War and its aftermath. The Ghost Stalker was deployed along with Umagon and the Hijacker in a mission to rescue the mutant Tratos from imprisonment in a Nod prison camp / hospital facility. It is very likely that the kind of treatment Tratos was undergoing at the facility was not entirely beneficial. In that particular event, his ability to destroy building and vehicles with one shot was greatly appreciated.

It is rumored that he assisted in aiding a GDI breakout of a mutant prison camp around the time that GDI was dealing with the Chemical Missile Crisis. He was also present during a GDI attempt to destroy power plants that were powering a Chemical Missile facility, causing some of the defences to go offline. Finally, Ghostalker was again instrumental in destroying a Nod prototype weapons facility - first scouting it out, and then assisting with its complete destruction.

His final known appearance in the Second Tiberium War was finding out the location of Kane's Pyramid in Cairo, and informing Michael McNeil that Umagon was held captive in its Temple of Nod.

Creation of a new 'caste'

During the brief interim between the Second Tiberium War and the Firestorm Crisis, the Forgotten acquired a number of additional railguns and could equip more of their kin with them.

When the Firestorm Crisis took place, the new Ghost Stalkers served with distinction. They were instrumental in the defense of the main mutant base, but despite their efforts, the base was still overwhelmed as the massive opposition they faced alone was too much to contend with.

Deployment of the original Ghost Stalker

The Ghost Stalker was sent in to retrieve the second piece of the Tacitus from the mutant-intolerant Cultists. He killed their leader, Mortimer, and many cult members, effectively dissolving it. In that endeavor, he was supported by a Juggernaut artillery mech, archaeologist Valdez and a medic, whose medical skills and equipment greatly contributed to the mission's success. Ghostalker had a degree of importance for that mission, as CABAL had calculated a 10% chance of success if Ghostalker were to be killed.

After the Firestorm Crisis 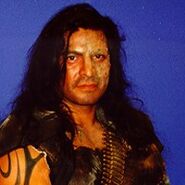 Retrieved from "https://cnc.fandom.com/wiki/Ghost_Stalker?oldid=245322"
Community content is available under CC-BY-SA unless otherwise noted.