The cephalopod Architeuthis dux, more commonly called the Giant Squid, is a deep-dwelling ocean creature that can grow to immense size. Despite the rarity and elusiveness of the creature, Giant Squid were used by the Soviets during the Third World War and the Psychic Dominator Disaster.

These creatures would attack a ship from beneath, wrapping their tentacles around it and crushing it. The ships had no defense against this type of attack, and would be unable to remove the squid by themselves. The targeted ship also became immobile once the squid grappled onto it. The squid may also choose to "slap" a target if entangling it is not an option.

There are inconsistent reports as to how the Soviets obtained the Giant Squids. Some reports state that Yuri's psychic ability was used to control them. Others say that Soviet scientists used pleasure-and-pain treatment to train the squids. Although, after Yuri's defection from the Soviet Union, the Squids continued to follow Soviet orders. Therefore, most intelligence insists that the second means was true, though some speculate that psychic ability could have been used to attract them. It is rumored that Soviet cloning technology may be involved in its breeding program.

Giant Squids can regenerate wounds. Also, because of its size and strength, it is able to withstand a torpedo or depth charge explosion. After all, the sea is full of nutritious sources of food. Between many options the sea has to offer, Giant Squid may favor indulging in a delicacy of highly trained Navy SEAL's muscle and bone (and even Allies' infamous commando, Tanya), though bullets fired from their submachine guns (or pistols in Tanya's case) may harm the Squid a bit.

The best known and most effective counter was the Allied Dolphin who were trained for the sole purpose of taking out Giant Squids. The Dolphin's sonic pulse would cause the squid so much pain that it would release ships and try to attack the Dolphin, but it would die from only a few sonic pulses so it rarely could reach the Dolphin in time.

Yuri also employed the Boomer submarine which prevented the squids from grabbing onto it allowing the submarine to easily slaughter the squids.

During the Psychic Dominator Disaster, the Soviets utillized a few of these units in a very unique tactic. They deployed the squid ahead of Typhoon Attack Submarines to pinpoint any Boomers and "lure" the Boomer's torpedos from the Typhoon (or any ship being covered). A direct hit from a Boomer can still be tolerated by the squid, provided that they keep maneuvering to dodge the torpedo barrage.

They are not known to be used in War of the Three Powers. Instead the Terror Drone was made amphibious and could therefore, fulfill the role of the Giant Squid. 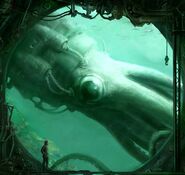 Beta icon
Add an image to this gallery
Retrieved from "https://cnc.fandom.com/wiki/Giant_squid?oldid=224413"
Community content is available under CC-BY-SA unless otherwise noted.