Giles Price is a British Air Force Commander and one of the most important Allied officers.

A shrewd, meticulous, and decisive tactician, at times witty, Commander Giles Price has a background in the RAF, where he was a top fighter pilot. When the opportunity presented himself, he accepted a desk job (one of the reasons was the amount of shiny chevrons ending up on his lapel) and a command post at the Von Esling Airbase in Iceland, one of the finest strategic Allied air bases in Europe.[1]

He has an unusual ego when it comes to commanding air force, which was one of the reasons why he developed an aggressive rivalry with Soviet air force ace, Vera Belova.[2]

In the Allied Campaign he is one of the most helpful co-commanders the player fights alongside. He helps defend Brighton Beach in England from General Krukov. At this point he proposes to make a dash for the coastal cannons to better prepare against the Red Army. He is not much seen during the campaign against the Imperials but it is implied he was fighting his own battles against the bulk of them. Being a Commander with experience in aerial warfare, he assists in preventing Kirov Airships from departing Havana. In some capacity Giles is very admirative of the Allied Commander and considers writing a novel about their exploits.

During the course of the Soviet's rise to power, Giles was one of those who defiantly combated the Communist oppression. He appears at the Research Facility in Greece with some heavy reinforcements after the Soviet Commander and Zhana defeat Warren's garrison in an attempt to retake the lab before the Soviets extracted the data.

He was also in charge of the defence of the Von Esling Air Force Base in Iceland, the last Allied stronghold in Europe. He has a good laugh at Soviet betrayal and infighting before his base crumbled around him. He was presumably killed at the Von Esling Air Base by the Soviet Hero and Commander Oleg.

Giles is one of the Shogun's adversaries and appears in many battles, most notably during the Allied assault on the Black Tortoise. At each operation, he is defeated until the Empire besieged Amsterdam where he would meet his doom when the Shogun and Shinzo Nagama destroyed his Airfield Base.

After the war ends with the Allies as the victors, Giles immersed himself more and more in matters of international policy, eventually emerging as an outspoken diplomat ... with his air force squadrons always at the ready to back him up. Giles was promoted as Director of the Office of Occupational Forces in Japan to oversee the Allied occupation of the Empire of the Rising Sun.

He does not aid the famed Allied commander in the Allied perspective of the Imperial Command & Conquer: Red Alert 3: Uprising (not that he was needed by his colleague) but Giles does contact the player in the Imperial campaign, regretting that he cannot assist the Empire in pushing back the Soviets from Japanese territory.

During the second Imperial mission, Before the Hallowed Tomb is when an Allied Outpost is destroyed and a few Pacifier FAVs and Multigunner IFVs had joined the Imperial Commander. Giles contacted him to saying if he had some vehicles at the outpost. He also told him to what happened to those forces he had at the base, but the transmission goes out.

When the Empire begins to act independently by attacking Vladivostok, Giles soon begins building up the Allied arsenal to take down both the Empire and the Russians. However he is bested by the Imperial commander who used the new Giga Fortresses against him, and retreated before the Empire could capture him.

During Yuriko's escape from Camp Dakota, she came across a secret file known as "The Tokyo Toll" saying about him from the last world war. According to the file, Giles and other Allied Commanders responsible for the attack on Tokyo Harbor were hailed as heroes.

Giles can be selected as an ally or an opponent.

"Well well! Look at what the cat dragged in! Let's make this quick shall we? My tea is on the brew."

(Near death) "I don't mean to bother you, Sir, but if we don't get reinforcement soon this could be the end of me."

(Dying/Defeated) "They would have given a medal for this one. If only I had survived."

(Death) "Well, it's curtain for me, Sir. Its been a privilege and an honor."

Giles like to send waves of aircraft to deal with his foes, including Apollo Fighters, Vindicator Bombers and Century Bombers. He will, however, not use Cryocopters as often as the other Air units. Considering the superiority of the Allied Airforce, It is advised to build a sizeable anti-air force when battling him.

However, it should be noted that he will still send a decent amount of tanks, usually backed up by Vindicators. Do not rely completely on anti-air to defeat him. Then again, if battling him on a sea map, beware of his frequent use of Aircraft Carriers.

Giles also appears in the Commander's Challenge, where his cocky attitude is usually seen as his downfall on many occasions against the Futuretech Commander.

Out of the Blue

This is the first mission in the Commander's Challenge that Giles appears in. The Futuretech Commander needs to defeat him in order to get the B2-X Century Bomber into the Commander's arsenal. From this mission, Commander Giles still had his office from The Uprising when he was Director of the Office of Occupational Forces in Japan in the Imperial campaign.

No Place To Hide

In the second mission, Giles believed that he had never seen the Futuretech Commander before since their ordeal in the United States. The problem for the Commander was to go around to the other side in destroying Giles' base. When the former RAF pilot is defeated, he says that his defeat was embarrassing along with his unit, the Spy. This mission takes place in Great Britain, Giles' home country.

Caught in the Crossfire

In Vera Belova's homeland, Giles and Vera decided to join each other to bring the Commander to surrender. They were both defeated by the Commander even though the rivalry between both pilots was holding tough. Giles evenly developed a grudge towards Vera Belova.

Giles was called an "Englishman" by Belova when she first contacted the Futuretech Commander and they payed an alliance to each other. When Giles gets defeated first or last, he calls the player's victory as "bloody ridiculous" after hearing on the telephone in his office and retreated from Mexico.

Giles contacts the Commander despite being on the telephone. He says that the Harbinger Gunship would zoom past his base, but didn't get the right moment when he's defeated by the Futuretech Commander who now possesses the Allied aircraft Giles had in three missions, including this one.

Giles said to the Commander that a Proton Collider had his name on it and there's not a thing the player can do with it to stop the weapon firing as a clock ticks. The only way to destroy the Proton Colliders on an island in the Atlantic Ocean was to either use Natasha Volkova or Tanya to rid of the weapons. Giles when defeated says he could had a different weapon better than a Proton Collider.

As the former RAF pilot and Vera Belova are seen again, the Commander decided to steal Shinzo's Nanoswarm Hive. Giles said that shotguns and missiles would do the trick to rid the FutureTech player from South Africa. All three Commanders including Giles were defeated.

With the Soviets defeated in The Motherland and the Japanese decimated in Battle Royale, the Allies were on their last stand in Russia. Giles, Douglas Hill and Lydia Winters brought out their Future Tank X-1s to rid FutureTech for the last time. All three Commanders were defeated by the victorious Futuretech Commander.

Giles is portrayed by Greg Ellis. Known for voicing Valmont in the first and second season of the Cartoon Jackie Chan Adventures. 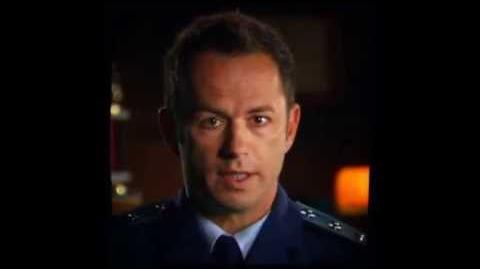 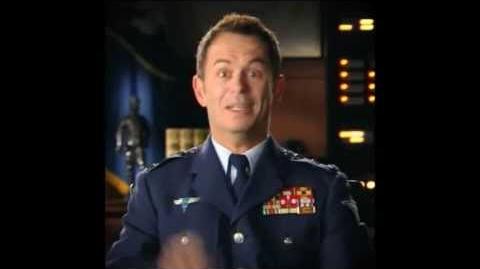 Retrieved from "https://cnc.fandom.com/wiki/Giles_Price?oldid=227993"
Community content is available under CC-BY-SA unless otherwise noted.