The Global Positioning System is a satellite navigation system, developed by the Allies during the Second World War. Requiring an effective way to scout enemy positions quickly, Allied scientists developed the ultimate scout: a spaced-based satellite system capable of granting the commander visibility over the entire battlefield.

Due to the extreme technological expertise needed, a GPS satellite could only be granted to an Allied base that had a tech center. Once built, Allied technicians would prepare a satellite for launch, and after preparations were made, the satellite would be launched into medium Earth orbit, revealing the topography of the area of operation, as well as the location of any enemy units.

By the time of the Third World War, the Allies had retooled their GPS service. Since there was a period of peace, a number of GPS satellite had been launched to serve various tasks. Realizing the existence of the Soviets' old space program, the Allies installed more security on their GPS via the usage of advance cypher techniques. To cater on this added protocol, the Allies relocated their services in a special service building called Spy Satellite Uplink. Due to the arduous task heavily involving cypher, the computer in the uplink center is connected directly to the Radar and Navigation facility inside any command center. So when the uplink failed (due to power problem and/or sabotage) the map and the entire location display is "reseted" back to any input available from existing units and structures, putting back the "fog of war" to the map.

Following the war, the GPS was commonly used for both military and civilian purposes. However, by the First Tiberium War, the Brotherhood of Nod had developed several specialized techniques and technologies for fooling the GPS, forcing GDI to resort to old-fashioned methods of scouting. Regardless, the GPS satellite formed the backbone of the future satellite network of the Global Defense Initiative.

The first satellite in space 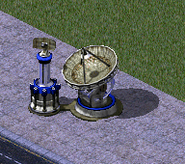 Retrieved from "https://cnc.fandom.com/wiki/Global_Positioning_System?oldid=229021"
Community content is available under CC-BY-SA unless otherwise noted.