The GLA captured Baikonur Cosmodrome during the First Battle of Baikonur and used ICBMs to attack major cities and US bases overseas with bio-chemicals. The launch site remained under the control of GLA remnants after the Battle of Akmola however. Another bio-chemical ICBM successfully struck a US naval base in Northern Europe. A previous attempt made by the Chinese to retake the facility was foiled, after the new missile is ready, the missile launches and destroys a US naval base in Europe, thus a US strike force was sent to prevent another launch.

A B-3 Bomber was already in the air as the assault on the GLA base ensued. GLA defenses were neutralized by the US forces exiting from the train and the B-3 delivered a MOAB that destroyed the launch facility.

You may not need build defenses as the GLA only attacks once. Just focus on building attack force. Be careful though on Terrorists using Car Bombs. As there are abandoned Chinese tech, including an Overlord tank, fit it with Propaganda Tower upgrade and build more Paladins to balance the threat. The GLA defending the depot is no less than a Stinger Site in the rear and several Tunnel Networks in the front. As you eliminate the defenses, capture the Black Market and destroy the Palace. Reinforcements will come after you eliminate the defenses. A train will arrive after you secure the depot.

Put your best forces inside, including the Overlord for good measure. Then get the UN supply caches scattered in the village.

The train leaves as you fill up the train cattle cars, stopping in the front of the Cosmodrome. Eliminate all defenses, garrison the civilian Listening Outpost building to call in MOAB (while capturing GLA buildings). 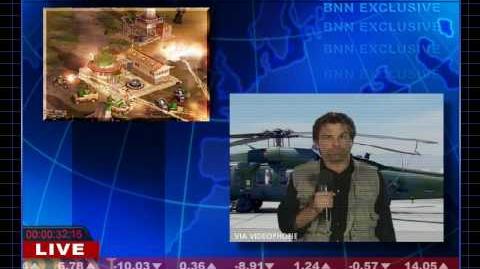