The Global Stratospheric Transport (GST) was a type of large GDI aircraft (or rather, spacecraft) in service during the Fourth Tiberium War. They were bases of operations for GDI field units. Smaller aircraft operated from GSTs.

The original vehicles served in the role of waste transports with their holds designed to accommodate large amounts of construction debris. These barges were capable of containing Tiberium contaminated waste and holding a months worth of such debris within them. Once filled to capacity, they used their powerful engines to enter into orbit where they began the second phase of operations. This involved using a powerful launcher system to eject the waste into space. Once their cargo was emptied, the transports returned to the Earth's surface where they resumed their mop-up missions.[1]

After being retrofitted as military transports, these large barges internal structure was made to support regiments of soldiers as well as vehicles. The same debris launcher system that was used to dispose of garbage by launching it into space was modified to serve as delivery mechanisms for drop pods that allowed for the quick deployment of Crawlers, infantry and vehicles onto the battlefield at a moment's notice. This allowed GDI to easily and quickly deploy its forces in order to respond to newly risen threats.[1]

The concept for these large craft came following the Third Tiberium War and after the defeat of the alien Scrin when Kane formed an alliance between the Brotherhood of Nod and GDI. This alliance brought about the creation of the Tiberium Control Network which would work to contain the threat of Tiberium had to the world. However, the resources of this endeavor would take years to complete. The early development of the project was overseen by the Idris Corporation though the construction proved to be a logistical nightmare. One of the key issues that came in the time was the fate of construction debris. The devastation of the environment following the destruction of Temple Prime in 2047 meant that no location was a safe diposal site for debris. It was only after a number of industrial accidents befell construction workers at Idris worker camps such as those in North Africa which saw a focused action to combat this problem. This led to the GDI Council in authorizing the development of a mobile barge designed to collect debris at various locations whereupon it would be disposed of in space.[1]

This led to the development of the "Stratospheric Waste Storage and Disposal System" which were manufactured by GDI Engineering and Construction. By 2064, their efficient work led to the creation of a fleet of waste transports that were tasked with moving around the Earth in order to collect the debris which was later jettisoned in outer space. This act provided a safe venue through which construction debris was capable of being disposed. These transports would have been relegated to this continued role had the 2060's not seen the rise of Nod fundamentalism. In those years, a rebel group from the Brotherhood was formed and declared Nod Separatists who were under the leadership of Gideon. These rebels believed that the Tiberium Control Network was blasphemy and that Kane had betrayed the ideals of the Brotherhood. This in turn led to a series of engagements that became known as the Tiberium Control Network Conflict. One of the key advantages of the Separatists was their hit-and-run tactics allowing them to strike at GDI or loyalist Nod forces at any moment. In order to combat this threat, the Crawler was developed as a mobile command centre for battlefield engagements. Despite this being the case, it was also decided to retrofrit the Stratospheric Transports into forward command centers designed to accommodate as well as support large number of troops and vehicles in the field.[1]

The first of these newly created Global Stratospheric Transports or GST's was the GST Methuselah which took flight in 2071. Since that moment, it became part of a fleet of such craft that contributed in combating the Separatists movement. It was the actions of the GST's that helped drive the Nod rebels underground by 2073 as well as reduced casualties that were being seen in the Tiberium Control Network. Since that time, the First Fleet had served a role of being a protector and circles the Earth where they await any sign of trouble to which they respond instantly.[1]

A GST in flight. 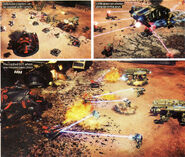 Concept art for the bridge

In game
Add an image to this gallery

Retrieved from "https://cnc.fandom.com/wiki/Global_Stratospheric_Transport?oldid=210783"
Community content is available under CC-BY-SA unless otherwise noted.