The Gravity Stabilizer is a Scrin structure, roughly analogous to human airfields, that can warp in air units. While unable to warp in the massive Scrin Mothership; the Stormrider, Devastator Warship, and Planetary Assault Carrier all can be built at a stabilizer.

Unlike human aircraft, Scrin ships never seem to need to reload their weaponry, so they never seem to land, unless quick repairs are needed. This means that unlike Orcas, Firehawks, and Vertigo Bombers which need an Airfield or Air tower, the destruction of a Scrin Gravity stabilizer doesn't hamper the operations of active Scrin aircraft.

As the Scrin air force is extremely powerful, it is recommended that Gravity Stabilizers be destroyed before they can start producing a substantial air fleet. 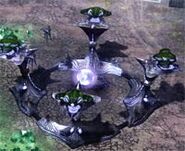 Retrieved from "https://cnc.fandom.com/wiki/Gravity_Stabilizer?oldid=216500"
Community content is available under CC-BY-SA unless otherwise noted.