Greed of the Vanquished

Greed of the Vanquished is the first Imperial mission in Red Alert 3: Uprising.

With the Empire of the Rising Sun officially subdued after their defeat by the Allies in the War of the Three Powers, Prince Tatsu now commands what is left of the Imperial military under Allied supervision. The Soviet Union was also officially subdued but this did not stop them in preparing a takeover of Sakhalin Island. Tatsu orders one of the few surviving Imperial commanders still loyal to the late Emperor's views to aid General Kenji Tenzai in halting the Soviet advance. Meanwhile Tatsu called for the Allied occupational forces to assist the Imperials of expelling the Soviets.

When the Imperial commander arrived at Sakhalin Island, Kenji was already under assault from the Soviets, led by General Oleg Vodnik. To make matters worse, the Allied Director of the Occupational Forces in Japan, Giles Price, regretfully apologized that he cannot assist the Empire to take out the Soviets. Seething, Tatsu granted the commander a Sudden Transport loaded with engineers and Shinobi, and Kenji advised him to capture a large yet undefended Soviet supply outpost in the area. Disguising the Transport as a Dreadnought, the commander guided it on land, much to the understandable surprise of the Conscripts. However the Russians did not investigate the matter. This was a mistake as the Transport entered the outpost and the engineers soon captured its vital structures. Now the Empire could fight against the Soviets using their own weapons against Vodnik.

Vodnik shrugged this setback off and contacted the commander of the new addition to the Soviet arsenal - the Grinders. Immediately a massive fight began between the Soviets and the Imperials. However the combination of Empire technology from Kenji Tenzai with Soviet weaponry from the commander was too much even for the Soviet Grinders or Apocalypse Tanks to handle and thus their main invasion base was destroyed. Annihilated, the surviving Soviets retreated along with Vodnik, who was none too pleased with the Imperial commander's tactics.

One Soviet invasion force was beaten off but another was soon detected heading towards Oki Island, the site of the late Yoshiro's tomb.

The first part of the mission involves sneaking engineers and shinobi into a soviet base and capturing it. After the base is captured build apocalypse tanks, migs, twinblades and kirovs to destroy the enemy. Kenji's base must survive otherwise the mission is a failure. Once Olegs base is destroyed just destroy the Grinder tanks with twinblades to win the mission. 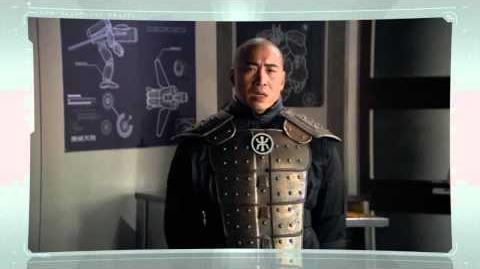