EMP is effective for 0.7 seconds, it reduces Movement Speed by 60% and Attack Speed by 25%.
The Grenadier is a GDI common infantry squad unit in Command & Conquer: Rivals.

The Grenadier has been a common sight is GDI armies since the very first Tiberium War. The modern Grenadier Squad is equipped with stielhandgranate-style grenades for increased range and EMP charged payload which can slow down even the largest enemy ground vehicles.

Grenadier squad excels at stopping vehicle threats. Not only do they have considerable damage output, but they also reduce the movement speed of vehicles, which makes it difficult to escape once the grenades start falling.

The rather sluggish movement speed of Grenadiers means they are not suited to chase down vehicles, but they do well on defense. If greater mobility is required, Jump jet troopers are a good alternative.

The ability to reveal stealthed units is a serious threat to the lightly armored Stealth tank.

Being a specialty unit, Grenadiers are vulnerable to air and infantry. To cover them, use Rhino, Pitbull, or a Wolverine.

Their substantial health allows Grenadiers to withstand anti-infantry fire from light aircraft and infantry for some time, but even then the supporting units should come to help as soon as possible. 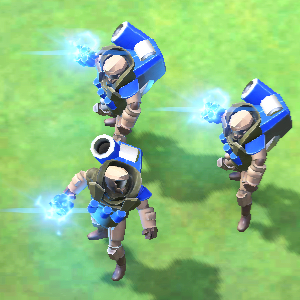 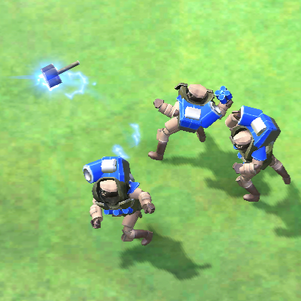 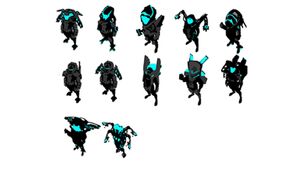 Retrieved from "https://cnc.fandom.com/wiki/Grenadier_(Rivals)?oldid=240761"
Community content is available under CC-BY-SA unless otherwise noted.