The Grinder was a large and slow Soviet tank equipped with devastating tungsten-coated grinders which could grind almost anything in their wake used during the Command & Conquer: Red Alert 3: Uprising.

Not so long ago, it seemed as though everyone, not just the Soviets, believed the Soviet Union's Red Army to be unstoppable.

Countless battle tanks, overwhelming air power, and legions of infantry comprised the largest and most powerful military force ever assembled. This mighty army suffered terrible losses to the Empire of the Rising Sun's surprise attack. This blow was devastating; the Allied Nations swept in and finally achieved a decisive victory against their old rival. Nevertheless, the Red Army survives, thanks to the leadership of certain surviving officers and some good old fashioned Soviet pragmatism. The Union denies allegations that the Red Army is attempting to rearm, but emerging details of new combat-ready forces seem to contradict those claims. For example, the Soviet Union would have you believe that its recently-unveiled vehicle, best known as the Grinder, is nothing more than an industrial-strength road roller built to smooth out pavement and clear wreckage in the Union's dozens of ruined cities. If this were true, why would the Grinder have military-grade armor and decidedly unsafe top speeds? And why would manufacturers directly linked to the Red Army be responsible for the Grinder's manufacturing?

These are troubling questions, but the brief history of the Grinder does corroborate the Union's claims of its innocuous nature. By the time the Union's leaders were brought to justice at Leningrad, the Union had more than enough scrap metal to call its own, as major cities stood lined with vehicle husks and blast craters. The process of literally cleaning up the streets was going to be long, difficult, and expensive. One Georgia-based construction company sought to make the most of this, on the assumption that the sooner the Union's cities and streets could be restored, the sooner the Soviet people could regain their pride and return to a normal way of life. The company's solution was to update its entire fleet of road rollers, once used for laying down asphalt, into street-sweeping super machines that had a resemblance to the iconic Apocalypse Tank. They were fitted with toothy, heavy-duty drums and upgraded with powerful engines that could push through anything. The machines were then retrofitted with pontoons from destroyed ore collectors, which would allow the roller vehicles to shove all the Union's trash and debris out into the water in record time. The result was nicknamed the Grinder, and in spite of the supposedly benign nature of the thing, initial attempts to make use of it had catastrophic consequences.

Although eye-witness accounts vary, the bottom line is that the operator of one of the Grinder prototypes, unaccustomed to the vehicle's overhauled engine, somehow caused eight deaths, 37 injuries, and several million rubles' worth of additional property damage while attempting to dump several wrecked Hammer tanks into the city's reservoir. This led to the shuttering of the Grinder's manufacturer, though the Grinder itself was saved: Remnant Soviet military forces must have taken an interest in how much destruction it caused in such a short amount of time, as they requisitioned all the prototypes and soon began piecing more of them together... all while denying any intentions of using the vehicles in possible wartime scenarios.

In any event, the Grinder has created hundreds of thousands of jobs in the Soviet economy, and it truly has helped clean up the streets. Skilled laborers first take the salvaged parts from destroyed vehicles to help cobble together new Grinders based on an open-ended specification. Then, less-skilled laborers are selected to operate the vehicles, which are quite simple to use (especially in comparison to military vehicles, with all their complex weapons systems). Grinders proceed to scrape away remaining junk, often into unused bodies of water within Soviet borders or along the coast. Even now, numerous Soviet cities, including Vladivostok and Kiev, almost look as though war never darkened their streets. The Grinder is partly to thank for this, to be sure. However, the undeniably dangerous nature of the vehicle dictates that its continued use must be closely watched by Allied military counsel.

Battlefield reconnaissance has revealed at least these facts about the Grinder:

• Chews through anything -- Though lacking conventional weapons, the Grinder can tear through any surface targets in due time. In general, the bigger the target, the longer it takes for the Grinder to chew it up and spit it out. Victims of the Grinder are helplessly trapped in place as the vehicle does its work.

• Turbo-charged -- Normally the Grinder isn't the quickest vehicle in the Red Army. To address this, an industrial-strength turbocharger substantially increases top speeds. Note that the turbo speeds cannot be sustained indefinitely due to the Grinder's inability to displace all the heat efficiently.

• In hot water -- True to its cobbled-together nature, the Grinder incorporates spare parts from Soviet ore collectors, lending it amphibious capability in spite of its massive girth. This is perhaps the least accidental aspect of the Grinder's design: The Soviets knew they needed a heavily-armored combat vehicle that could breach out into contested waters and clear a path for expansion forces.

• A turn for the worse -- Although the Grinder is quicker than a battle tank, it cannot turn as easily because of its wheelbase. This means smaller enemies can sometimes outmaneuver it to avoid getting torn to shreds. The solution, says Soviet strategists, is to attack with multiple Grinders driving side-by-side.

• Rush It! -- The Grinder's special ability allows it rush enemy forces by temporary burst of speed that gives the Grinder an opportunity to crush cowardly foes and to flee-for-cover as well. 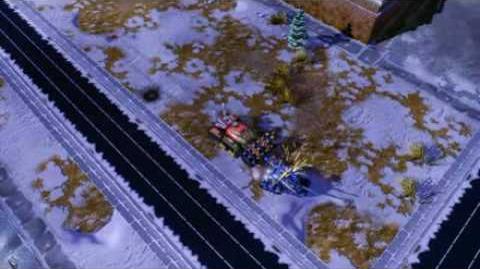