The Grinder was a Yuri structure that could recycle any ground unit under the Yuri player's control (including mind controlled units) converting them into funds. This rewarded aggressive and ruthless tactics amongst Yuri players including recycling obsolete units, capturing and recycling enemy units and converting hordes of slaves into Brutes with the Genetic Mutator and then recycling them into credits.

The Grinder was Yuri's answer to being short on funds during Psychic Dominator Disaster. During his takeover of Hollywood, Yuri decided that the supporting characters, B list actors, and various other supporting staff were not valuable to a new, Yuri driven society. After all, what is the use of entertainment when there is no-one with free will to enjoy it? Deeming that the people in Hollywood were useless except in movies, he decided to recycle them all to fund his war effort. Afterwards, he employed grinders wherever his forces went as a supplement to his economy.

Yuri and his army were erased from history when his timeline was replaced with the events of Red Alert 3 with its own Grinder tank. So, in a sense, the Grinder in this form never existed.

The grinder was basically a large chamber with many spiked spinning and rotating grinders within it. The grinder would intake any unit, be it organic or mechanical, and break it down into scrap for recycling. Although the process wasn't perfect, some value was still gotten out of the pieces. Inorganic parts would be sent to Yuri's armouries, war factories, construction facilities, and naval yards. On the other hand, organic parts would either be used in the cloning vats, Bio reactor, or to supply the crews and soldiers under Yuri's command.

Grinder may fill the role of service depot as it "replenishes" the armed forces in Yuri's way. In this state, a grinder is essentially a required building for Yuri's war factories to access Yuri's MCV.

Yuri's grinder was a convenient way for his commanders to dispose of any unwanted mind-controlled units. This was especially useful if transports carrying valuable units could be controlled, such as a Chrono Legionnaire loaded into a Battle Fortress. If the transported units were disgorged from their transport, they would revert to their original owner, however, when a transport was sent to the grinder, all the units within it were recycled as well. The grinder also functioned as a convenient way of removing unnecessary units from the control of Psychic Towers. Since a Psychic tower could only control 3 units, some commanders would rush a tower with inexpensive units to fill up its queue before attacking with more valuable units.

The grinder was a convenient means of disposing of the cheaper units. Another tactic, involving the Genetic Mutator and slaves from the Slave Miner, could turn out quite a large sum without any expense to the owner. Since slaves were free to manufacture, the Genetic mutator could be used to turn them into Brutes, which could then be fed to the grinder for the credits. This also works well for disposing of basic infantry paradropped by a captured Tech Airport. Another tactic would be using it in conjunction with the array of Psychic Tower. With these arrangement any unit psychically controlled would be recycled immediately, freeing the slot for the tower to control another immediately. Anti air and more "in hand" management is required for this tactic.

The Crusher Crane is most similar to this Grinder, except that it will only grind ships and tanks.

During the War of the Three Powers, Apocalypse tanks sport smaller grinders that are used for offensively grinding enemy tanks, ships and structures. Later in the war, this mobile grinder technology was further advanced, yielding the new Grinder vehicle. 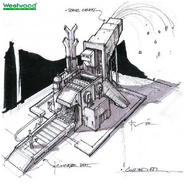 Icon with Chinese text
YR Grinder Textless Icons.png
Icon with no text
Add an image to this gallery
Retrieved from "https://cnc.fandom.com/wiki/Grinder_(Yuri%27s_Revenge)?oldid=176988"
Community content is available under CC-BY-SA unless otherwise noted.