The Grizzly battle tank is the main battle tank of the Allied Forces used during the Third World War and the Psychic Dominator Disaster.

The Grizzly mounts a unique chassis, consisting of two drive trains extending beyond the main hull and crew compartment. On top of the chassis is mounted a relatively narrow turret, carrying the main gun of the Grizzly.

Cheaper than the Rhino Tank, it's a match for most Soviet vehicles, but is weaker than Soviet tanks. Although not as strong as the Rhino or Apocalypse tanks, Grizzly Tanks can outmanoeuvre the slower Soviet vehicles, bypassing them completely in order to attack more vulnerable units in the rear, such as V3 rocket launchers or even an enemy base, making it an effective candidate for hit-and-run attacks. Its speed epitomizes the Allied tactic of rapid fight engagement. Deficiencies in armor can be negated in extended engagements by the use of IFVs with Engineers, replenishing the armour for another battle.

In the new timeline created by Anatoly Cherdenko's time travel, the Grizzly was beaten by the British Guardian tank in performance tests, which replaced it as the new Allied MBT.

The Grizzly is one of the fastest tanks in RA2, easily outpacing its Soviet counterpart, the Rhino. It is also an inexpensive unit to build, making it easy to mass produce quickly. These attributes combine to make a unit that is tailor built for swarming hit-and-run tactics, with an above decent damage rating that makes the Grizzly a potent threat to enemy structures and vehicles.

Grizzly tanks are not solo fighters in any way. Though an effective assault unit, the Grizzly is still weaker than Soviet tanks and because they lack anti infantry weapons they are ineffective against infantry. Therefore anti infantry support is a must, though they are still able to crush most infantry with their treads. Grizzlies should always travel in groups of five or more for maximum efficiency, and if those numbers can be bolstered with more exotic tanks like Mirage Tanks or Robot Tanks, such additions should be made immediately. In fact, late game Grizzlies are perfect escorts for more vulnerable Allied armor like Prism Tanks; few things in Red Alert 2 are as potent as a Prism Tank bombardment with Grizzly protection.

Grizzly tanks are an excellent choice for defending your base against enemy paratroopers as they have relatively high health and damage for main ground vehicles. They are capable of soaking up a significant amount of damage, delaying attackers and allowing your fixed defenses take care of the rest. Because they are fast, they can crush enemy infantry under their treads.

The Grizzly's greatest vulnerability is Soviet enemy armour, especially Apocalypse Tanks, of which just one can destroy a Grizzly with ease. Numbers and speed are a Grizzly's greatest assets, and should be employed whenever a Grizzly sees combat. In Red Alert 2, the Grizzly is the Allies' heaviest assault vehicle when it comes to armour making it more suitable for head on assault against Soviet armour division but they should always be supported against infantry and heavier vehicles. In Yuri's Revenge however, the Battle Fortress takes its rank as the Allies' heaviest vehicle.

Grizzlies are one of the few Allied vehicles that cannot attack aircraft. This makes them easy pickings for Allied Rocketeers, Harriers, Soviet Kirov Airships or Yuri's Floating Discs if they are not within range of an Allied IFVs, or Patriot missile system.

Grizzly tanks are only able to damage one unit at a time. This makes it very easy to overwhelm them with large groups of GI's or Conscripts (unless they crush them using Force moving).

Following the Psychic Dominator Disaster, the Allies realized that the Grizzly tanks were indeed too weak compared to the Rhino tank, costing the lives of many tank pilots who were crushed by Soviet armour divisions. For this reason, the Allies decided to replace it with Paladin tank in the Post-war Crisis.

In the new timeline created after Anatoly Cherdenko's time travel, the Grizzly tank's design was considered for use as the Allied main battle tank, but ultimately lost to the Guardian tank by a small margin during field tests, which became the Allied MBT during the War of the Three Powers. 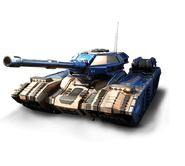 Retrieved from "https://cnc.fandom.com/wiki/Grizzly_battle_tank?oldid=240724"
Community content is available under CC-BY-SA unless otherwise noted.