The MBT-X8 Guardian Tank is the Allied MBT during the War of the Three Powers and The Uprising. A main battle tank of British origin, it features a powerful main gun as well as a unique target designating systems, allowing it to "paint" an enemy unit and relay targeting information to other Allied units, boosting their effectiveness against the enemy unit.

Faced with Soviet incursions on multiple fronts, Allied nations hurriedly banded together to form a military coalition from the toughest or surviving bits and pieces of representative nations' defense forces. Although the need to form a cohesive military network was urgent, certain key elements needed considerable time to be flushed out. After all, despite widespread differences of opinion within the Allied ranks regarding how best to repel the Soviet Union's advancements, everyone was on the same page about at least one thing: The Allies would not get a second chance to keep their nations' sovereignty. So it was with great care (and some trepidation) that Allied War Council made the decision to move forward with plans to double down on production of the MBT-X8 Guardian Tank, mainstay of the Allies' armor divisions, and a crucial component in the free nations' struggles to keep the USSR from expanding its borders any further.

A main battle tank of British origin, the Guardian became the mainstay of Allied forces on the ground worldwide after besting the Grizzly, an American-made design, in field tests across the board. While the Guardian's performance characteristics admittedly did not exceed those of the Grizzly by a wide margin, even a narrow victory was enough to justify switching production lines over to this newer model. After all, the Allied War Council fully expected to have to deploy Guardians in bulk in order to stave off Soviet armor divisions, believed to be the strongest in the world. To that end, the Allied Guardian Tank has proven to be something of an underdog, effectively helping to repel larger Soviet forces while bolstering the combat-effectiveness (if not the morale) of coalition forces caught in the same struggle.

The Guardian boasts an impressive balance of power, durability, and maneuverability and has a molded frame that helps keep production costs down. Its 90mm main gun can punch through Soviet and Imperial armor reliably and packs more firepower, though a slightly lower rate of fire, than the Guardian's Soviet and Imperial counterparts. However, the Guardian's counterparts were not the Allies' greatest concern, for they needed to be able to contend with an assortment of heavy vehicles. To this end, a relatively heavy platform like the Guardian Tank proved to be a suitable home for a special targeting device that could be used to even the odds against the worst that the Soviets had to offer. Each Guardian Tank now comes standard with a target-designating module, which replaces the exposed machine gun mount found on older models. Designed to complement other Allied weapons platforms, the Spyglass target designator (colloquially called the "target painter") relays targeting information to nearby Allied forces. By automatically interfacing with their weapons systems, the target painter makes other forces more accurate and deadly by compensating for wind direction, visibility, and more than 100 marginal factors—all of which add up. A Guardian Tank is unable to maintain the beam through the recoil of its main gun's firing sequence, so Guardian crews must coordinate well to decide which unit within the column is going to "cast the lure" (as Guardian technicians put it) while the others press the attack.

Battlefield reconnaissance has revealed at least these facts about the guardian tank:

• Built to last -- The Allies' main battle tank is able to shrug off most small-arms fire and can handily deal with smaller armored vehicles in the Soviet arsenal. Its armor can even withstand several direct hits from the Soviets' bigger and slower elements, although fighting in the vicinity of an Allied Armor Facility and its repair drones is often necessary in order to counter larger numbers of foes.

• Armor-piercing power -- Guardian Tanks work well in small groups, as this way they can compensate for their average firing rate while dispatching armored enemies and military facilities quickly and cleanly. Note that because Guardian Tanks are armed only with their smoothbore guns for cost reasons, they are not effective against smaller or faster targets. To this end, a high-priority memorandum regarding Soviet Terror Drones has reportedly been circulating very quickly among Guardian crews.

• Target sighted -- The Guardian's Spyglass target designator may not seem like an obvious trade-off given that it cannot be used to damage an enemy vehicle directly, unlike the Guardian's main gun. However, by functionally bolstering the attack power of all other Allied forces trained on the target of the Spyglass, a Guardian Tank crew using this device may prove far more essential to the outcome of the battle.

• Beware of air -- Guardian Tank crews rely on anti-air support, for they make prime targets for Soviet combat helicopters. In what some see as an overzealous effort to counteract the Soviets' feared Twinblades, the Allies have begun deploying a variety of powerful anti-air platforms, including its Hydrofoils and, of course, the Multigunner IFV.

The Guardian is a cheap, fast and powerful standard tank. Despite its 90mm gun being more powerful than the 85mm guns and the 88mm guns used by the Hammer Tank and the Tsunami Tank, respectively, the Guardian Tank is still weak against heavy vehicles such as Assault Destroyers, King Onis and the usual Apocalypses, and of course aircraft and anti-tank infantry. Therefore, it is ideal to support these tanks with anti-infantry and anti-air units. They also work well when coupled with Cryocopters, who can weaken enemies for them with their cryo-beams and S.H.R.I.N.K. beams.

Guardian Tanks can level bases quickly if sent in battalions with at least three units that use target-painter mode. Their target painter is used on all surface targets and causes those targets to take extra damage while it is used on them (if the Advanced Technology upgrade is authorized, the target's health is cut in half while the target painter is used). This gives the Guardian tank a use as a support unit even when stronger units are available. However, the effects of multiple target painters do not stack, so having multiple Guardian Tanks use their target painters on one target would not cause it to take any extra damage. 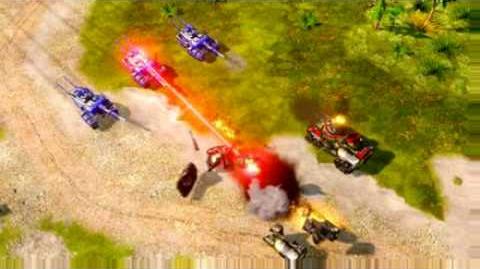 Retrieved from "https://cnc.fandom.com/wiki/Guardian_tank?oldid=237575"
Community content is available under CC-BY-SA unless otherwise noted.