Gun walkers were Scrin anti-infantry/anti-aircraft bio-mechanical walkers encountered during the Third Tiberium War. Like many other Scrin units, they resemble an enormous insect and moves around on six legs. They carry a rapid-firing low-intensity energy gun highly effective against infantry and aircraft.

Gun Walkers have much more health and damage resistance than the other Tier 1 Scrin vehicle: the Seeker—and are in general, much more resilient than the other factions' Tier 1 anti-infantry equivalents (GDI's APC and Nod's Buggy).

They specialize in anti-infantry and anti-air purposes but can also be effective against light vehicles such as GDI Guardian APCs and Nod attack bikes (although Seekers are more effective).

The combination of Gun Walkers' substantial durability, good speed, excellent mobility and capability to crush infantry allows them to easily trample entire squads of light infantry, trade blows well with even specialized anti-vehicle infantry and aircraft that they encounter such as: Zone Troopers, Stormriders or Orcas, and evacuate from dire engagements at speeds few anti-armor units can match.

Their good all-around stats, effectiveness against all infantry, incredible scalar damage against aircraft paired with their relatively cheap ($700) cost ensures their widespread deployment, and enables them to be one of the most versatile anti-air vehicles in the game (in contrast to dedicated anti-air units such as Slingshots and Mantises). 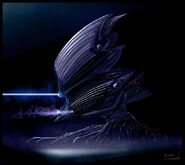 Add an image to this gallery
Retrieved from "https://cnc.fandom.com/wiki/Gun_Walker?oldid=237530"
Community content is available under CC-BY-SA unless otherwise noted.