Hackers were highly trained computer experts recruited by China to serve in their armed forces.

Since they are not intended to be front-line fighters to be thrown straight into harm's way, they receive no weapons training or body armor. However, their skills in computers can give the Chinese a boost in their war resources or even wreak havoc on the enemy's base if they managed to infiltrate behind enemy lines. Hackers could remotely disable enemy structures using sophisticated computer programs. More often, however, they were employed in hacking insecure bank accounts of unsuspecting Internet users, covertly diverting money into China's military coffers. First the general gets 5 cash every few seconds with them; after generating $500, the hacker gets promoted, generating $6 at a slightly faster rate, then $8 at an even faster rate after generating an additional $1200, reaching full rank after generating an additional $1600. At full rank hackers give a general 10 cash every second.

Later in the conflict, the Internet center was developed to protect and aid Hackers in this task by providing them with improved internet access and a shelter that can withstand a direct hit from a super weapon. While China denied the use of this tactic, GLA attacking forces caught Hackers red-handed on more than one occasion, landing them a propaganda coup. Responding to GLA increased aggression toward Hackers. Chinese troops are given a high priority to protect these men from harm. The Hacker could also disable an enemy building, but needed to stay in contact with the building.

General Shin Fai created a core of elite hackers, the Super Hackers that were trained by Black Lotus herself.

Most of the time Chinese generals would train Hackers midway through a battle in order to stop their funds running out. The Internet center was useful for keeping Hackers safe from enemy units, but was not always considered essential. As they gained experience, Hackers could acquire more and more money at a time. Should a Hacker is ordered to hack either a building or unsecured bank account, they will stand down, deploy their laptop and stay in the position until the hacker activity is stopped. Hacking money can gain experience value to them and earn them veterancy, this in turn increase the hacking value of each hacker. Dollar per dollar, a heroic hacker can gain more funds compared to Black market and Supply drop zone.

However, being defenseless infantry units, Hackers required protection at all times, and were ripe targets of opportunity for any enemy unit, whether being run over by vehicles or simply shot at freely by any infantry unit. Hackers have absolutely no kind of protection whatsoever against nuclear radiation or toxic chemicals, and were vulnerable to such weapon strikes.

Should the ability be available, the GLA's Rebel Ambush can easily pick off a group of unsuspecting Hackers, which is a heavy loss to any Chinese general who is relying on them for income in the late-game phase. 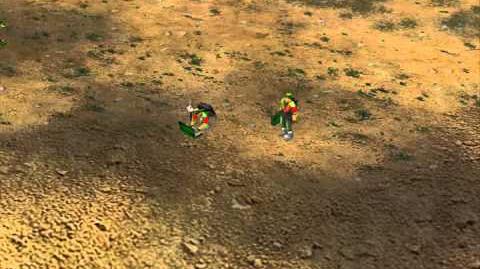 Retrieved from "https://cnc.fandom.com/wiki/Hacker?oldid=230796"
Community content is available under CC-BY-SA unless otherwise noted.