The Hand of Nod is the iconic structure of Nod, that appears in Renegade

The structure's facilities are mostly located underground, with only two levels located above ground. The highest part of the Hand contains an emergency medical lab, for injured Nod brethren requiring assistance. It is connected to a helicopter landing pad just behind the arm protruding from the structure.

The ground level is accessible through a large ramp in front of the building. The ramp leads to a lobby with two elevators (one leading deeper underground and the second to the emergency medical facility) and a corridor leading into the command center data processing room. The corridor also has a shrine dedicated to those who were "lost, but not forgotten" placed in between the two sliding doors leading into the command center.

The rear part of the command center serves as data storage, while the center itself, accessible through a corridor directly below the entry walkway, houses command consoles and status screens as well as the primary data processing cores, flanking the structure's Master Control Terminal.

The underground levels, accessible through two elevators - one from the main lobby and the second from the rear, house a majority of the bases' facilities.

Sublevel one serves as living quarters, with a large sleeping area with over twenty eight bunks connected to two bathrooms and a lift going straight to the surface, allowing for quick mobilisation and deployment of troops in case of an emergency. Additionally, it houses a large meal hall and a kitchen, to keep the troops well nourished.

Sublevel two is basically a training level doubling as an armory with a close-quarters-combat training mat, a fully equipped gym, weapons' locker and, what was most impressive, an indoor exercise arena for Nod troopers, complete with an artificial lake.

The deepest level (access was strictly limited only to the highest ranking members of the Brotherhood) houses faith restructuring facilites (which double as interrogation cells) as well as the morgue and torture chamber. The cells were accessible from the elevator, and outfitted with Venetian glass (so that Nod overseers could watch the subject without being seen), padded walls, a bright lamp and a wallscreen.

The observation room had two seats per cell with a glass table in front of them. Beyond that room lay the torture chamber, with two stasis cells (with an unknown purpose) and two cross-shaped gurneys with leather straps (similar to those used for lethal injections). Flanking the room are the morgue chambers, with enough space for over thirty bodies.

In the multiplayer levels, the Hand of Nod appears much smaller and much less detailed. The ramp going up to the door is smaller as well as the door itself. Inside is a small corridor that branches out into the "Command Center" , where the Beacon is. Out from the center is a ramp which passes by the Master Control Terminal and heads outside throught the back. The Hand of Nod allows for advanced infantry units. Without it, all Nod players could only access Nod Soldiers, Shotgun Troopers, Flamethrower Infantry, and Engineers. 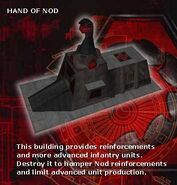 Hand of Nod in Renegade database

Lobby, note the mysterious Kane banners over the elevators 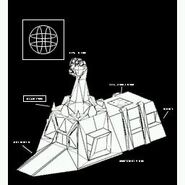 Retrieved from "https://cnc.fandom.com/wiki/Hand_of_Nod_(Renegade)?oldid=240883"
Community content is available under CC-BY-SA unless otherwise noted.