The AV-8 Harrier is a high speed VTOL (Vertical Takeoff and Landing) fighter employed by most of the Allied forces during the Third World War and the Psychic Dominator Disaster. Korea was the only exception, as they used the Black Eagle instead.

This VTOL jet is the main fighter of the Allied forces. Capable of both hovering and flying at high speeds, this single pilot aircraft is the bane of enemy armour and buildings thanks to its array of Maverick missiles. However, it has very weak armour and any kind of AA defense poses a serious threat. Gatling cannons and Gatling tanks prove to be extremely effective, as the high rate of fire and AP rounds can easily punch through the light fuselage of a Harrier. Flak while not as powerful is better at taking out large groups, due to the area effect caused by exploding shells. Harriers can take off vertically, but fuel limitations prevent them from patrolling the sky for a long time. However, Harriers will not crash because of fuel shortage and can be used to reveal the map. If the Airforce Command is destroyed, the Harrier will stay mid-air until it unloads its missiles, if it manages to evade the destruction of its airpad. Maverick missiles cannot attack air targets.

The Harrier was the most used aircraft by the Allies, fielded by most Allied nations. Korean engineers, however, noticed the severe armor weaknessess of the aircraft and designed their own advanced replacement. The result was the Black Eagle, which possesses more firepower and greatly improved survivability than Harriers while maintaining the same production cost.

Harriers should be used for destroying specific immobile targets, as well as slow ground-based units (ore miners, for instance). Roughly three Harriers can destroy a tank, less if veteran or elite. It is, however, rare for a Harrier pilot to survive long enough to gain a promotion.

Harriers drop to the ground then explode, dealing additional damage when destroyed. It is also useful to damage other enemy buildings (but it can still cause friendly fire).

In War of the Three Powers, the F-11X Apollo Fighter has replaced the aging Harrier on its anti-air duty, while the B2-X Century Bomber and Vindicator have taken its place regarding ground attacks.

Harriers flying over an American flag during General Carville's funeral

Mojo Squadron over San Francisco. The Squadron were wiped out on this sortie by Yuri Gatling cannons guarding the Psychic Dominator.

Icon with Chinese text. The words 入侵者 actually mean "Intruder", which was the working name of the Harrier 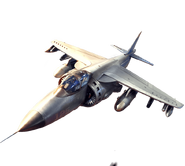 Retrieved from "https://cnc.fandom.com/wiki/Harrier?oldid=240125"
Community content is available under CC-BY-SA unless otherwise noted.