The supply collector of the European Union is expected to appear in Generals 2. It was first seen briefly in the gameplay trailer then at EA Live at Gamescom.

Its first appearance resembles the Osprey rotorcraft, but it's later changed to look like a mix of Stallion and Chinook helicopters. 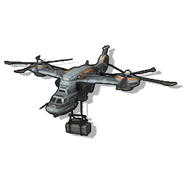 Add an image to this gallery
Retrieved from "https://cnc.fandom.com/wiki/Harvester_(Generals_2)?oldid=213943"
Community content is available under CC-BY-SA unless otherwise noted.