The Helicarrier is an Allied naval unit that was cut from Red Alert: The Aftermath. Despite this, the unit is fully functional and can be added into normal gameplay by opening up the aftrmath.ini file (you may need to download this and place it into your Red Alert directory) and changing the TechLevel value under [CARR] from its default value of "-1" to any number between 1 and 9.

Once built, the Helicarrier can be loaded with up to five helicopters, either Allied Longbows or Soviet Hinds. When the Helicarrier is ordered to attack (it has unlimited range), it will launch its aircraft which will then attack the target then automatically return to the Helicarrier to reload. While in-flight, the helicopters can also be manually selected and given other orders as well.

Unfortunately despite the novelty of the Helicarrier, this unit does not have much practical use. Because the Helicarrier launches its aircraft one by one at a slow rate, it will result in helicopters being fed into battle piecemeal, making them easy prey for anti-air defenses. Furthermore damaged helicopters are not repaired when they land, and it can require a lot of micromanagement to get damaged helicopters out of the Helicarrier and back to base for repairs. Lastly, if you are able to establish naval superiority and bring a Helicarrier to your enemy's shore, then you can easily do the same with a Cruiser or Missile Sub, both of which possess far more devastating firepower as well as being cheaper than a fully loaded Helicarrier. 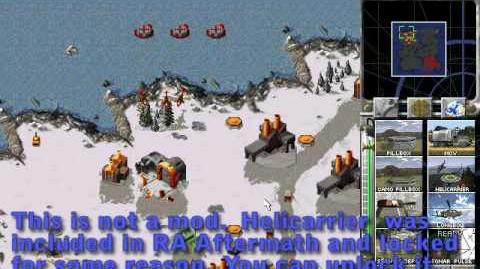 RA1HelicarrierVideo
Showcase video
Add an image to this gallery

Retrieved from "https://cnc.fandom.com/wiki/Helicarrier?oldid=231064"
Community content is available under CC-BY-SA unless otherwise noted.