Hidden Agenda is the second mission in the GLA campaign of Command & Conquer: Generals Zero Hour. It is an operation to unite the organization once more and seize the stealth technology needed to wage war against the 'infidels'. GLA loyalists fought against Prince Kassad at his Cairo stronghold.

With the GLA leadership still in disarray, GLA splinter factions fought each other for power and control of the organization. One of those splinter groups was headed by Prince Kassad, a General who specialized in stealth and camouflage. His technologies were vital to the future of the Global Liberation Army, but Kassad is unwilling to share them with his fellow "freedom fighters". GLA troops loyal to Deathstrike, then had no choice, but to forcibly acquire them and eliminate Kassad.

Whilst a GLA Commander entered Cairo near the Pyramids and the Sphinx, a loyalist Rocket Buggy patrolled the surrounding area "seeing nothing but dust for hours" despite reports of troop movements linked to Prince Kassad. Before returning to base however, the buggy was ambushed and destroyed by a hidden Scorpion tank. The GLA Commander was then given a short demonstration of the tactical benefits of Kassad's technologies; the GPS Scrambler and Sneak Attack abilities were put to use by Kassad against a small American garrison at a nearby oil rig.

Knowing that Kassad would utilize his own stealth arsenal against him, the GLA Commander surrounded his base with Radar Vans and Demo Traps to detect and surprise the enemy. This worked, when three of Kassad's Rebels were detected and later killed by one of the demo traps. However, he built up his defenses since it would only be a matter of time before Kassad can gather a large force to batter through the defensive line.

The first Command Center housed the GPS Scrambler technology, but this was defended by a camouflaged Arms Dealer and Barracks that were detected by the radar scans. To eliminate any stealth units, the Commander brought his Radar van along and sent his forces to the town. After a minor skirmish at the town, the Commander quickly captured the Command Center and seized the GPS Scrambler. Along the way, he sent a Rebel to capture a Black Market located just outside the city to gain more funds and upgrade his forces.

With both the Scrambler and the Sneak Attack technologies at the hands of the GLA loyalists, the last thing to do was to kill Prince Kassad. Unfortunately, all access points to Kassad's main HQ were blocked or destroyed by Kassad and his Command Center was littered with his camoflauged base defenses.

Using the radar scan again, the Commander used his Scud Launchers and destroyed every single Stinger Site and unit he could detect, while his best forces entered one of their own Tunnel Networks. The Commander, then positioned the Sneak Attack over the cliffs and his forces wreaked havoc everywhere surrounding Kassad's HQ. This time, the Commander did not want to capture Kassad's HQ and instead destroyed it. Prince Kassad is presumed to be buried among the wreckage.

With the main splinter group destroyed and its leader eliminated, the GLA was united once more under Deathstrike's leadership and prepared to make their comeback against the Americans in the Mediterranean Sea.

Initially, sell the Demo Traps and build static defenses while you build your force. Build as many as 6 Radar Vans to spot the invisible enemies around. Then build a force to eliminate Kassad's spies near your village first, then eliminate the safe route's Demo traps then match Kassad's forces on the villages. Capture the Oil Derricks,Artillery Platforms,Oil Refinery and the abandoned Black to be useful to you. The first Command Center is near a bridge. Eliminate the defenders and capture it, the Barracks and the Arms Dealer nearby. You will get the GPS ability.

You can also go to the area where Kassad eliminates the US outpost, capturing the Oil Derrick and eliminating Kassad's damaged Sneak Attack.

The last Command Center is either captured or destroyed (the former is easier). The last one is in the middle of a lake accessible only by a strip of land in the mountaintop. 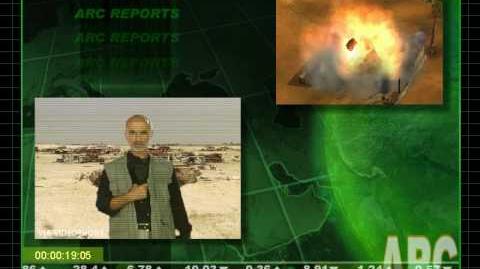