The High Confessor is an infantry unit used by the Brotherhood of Nod Defense Class in Tiberian Twilight.

In the Third Tiberium War, Confessors often lead Nod units to battle, teaching them and leading them. Although Gideon's defection stripped a number of these officers from the Nod ranks, the High Confessors remained, and lead in the battlefield. Now armed with Tiberium fueled lasers and in heavier armor (which rumored cybernetics), they are a true threat. However, they are few, so only Kane's trusted commanders may call upon their services, and even then access to them is limited.

The High Confessor is the Brotherhood of Nod Defense Class's Tier 3 elite cybernetic infantry. A natural progression from the Confessors who saw service in the Third Tiberian War, they are now armed with Tiberium-infused lasers that deal blast damage. The laser can also prism to hit multiple targets. The attack also deals Tiberium Corrosion damage, which reduces the armour and slowly damages the affected unit over time. They are extremely effective against large groups of light units (especially Engineers) and structures. Unlike the earlier Confessors, they can now also hit air targets with their lasers. The Tiberium bounce effect makes it also a tough unit to take down.

The High Confessor, as an infantry unit, is weak against concentrated gunfire, but their substantial armour and health allows them to sustain immense amounts of damage before falling. Their blast-based weapon also allows them to take on most enemies, even aircraft. They are extremely dangerous to face and it is highly advised to use long range units to destroy them from a great distance.

High Confessors are easily recognisable by the large green liquid Tiberium tanks strapped to their backs that power their lasers.

Their closest GDI equivalent is the Zone Captain, but unlike their Ion Cannon bearing counterparts, the High Confessor can target air units.

An achievement can be earned if the player uses it to damage several targets. 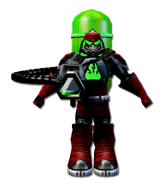 Retrieved from "https://cnc.fandom.com/wiki/High_Confessor?oldid=220707"
Community content is available under CC-BY-SA unless otherwise noted.