The Hind is an attack helicopter used by the Soviets during the Second World War.

The Hind acted as a mobile weapons platform to counter Allied infantry and destroy Allied buildings for the Soviets. It was used extensively against the Allies when the Allies assaulted Soviet cities and positions.

The gunship's main weapon is a chaingun, with rockets used as secondary weapons. The chaingun is capable of mowing down infantry at an alarming rate and is surprisingly effective against vehicles and buildings (due to the weapon being of a very high caliber). The Hind had two top-mounted turboshaft engines that drove a mid-mounted five-blade main rotor and a three-blade tail rotor. Its crew of two was seated in a tandem "double-bubble" canopy. Weapon hardpoints were provided by the two short mid-mounted wings (which also provide lift), which could carry three hardpoints each. The load-out was mission dependent, so the Hind was able to provide anti-infantry, anti-tank, or anti-aircraft support with different weaponry as the need arose.

The Hinds were decommissioned before the Third World War broke out and was replaced by the Siege Chopper during the Psychic Dominator Disaster, which were, in turn, replaced with the Twinblade Gunship after the timeline was altered by Cherdenko's trip to 1927.

The game's mechanics limit the Hind to an anti-infantry role, as it only used the chaingun in-game (the game did not allow for multiple weapons on a single unit). The Hind can not haul infantry or carry different weapon loadouts.

The Hind attacks targets by hovering over the target and shooting the target. This made it considerably more accurate than the Yak attack plane. 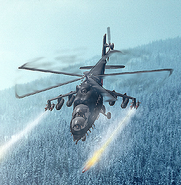 Hind shot down in a forest

Retrieved from "https://cnc.fandom.com/wiki/Hind?oldid=222412"
Community content is available under CC-BY-SA unless otherwise noted.