President of the United States

Howard T. Ackerman was the President of the United States in Command & Conquer: Red Alert 3.

Howard T. Ackerman is an ambitious American politician whose political ideology is anticommunism. He is convinced the Soviet Union hates everything the United States stands for: freedom, liberty, the pursuit of happiness and apple pie. He ridicules the Soviets as "godless commies" and is willing to push the invading Soviet army from Europe (if not off the earth altogether). Ackerman is an enthusiastic and energetic leader, loyal to the American people. His brash and self-righteous political tactics are a stark contrast to the British Field Marshal Robert Bingham, who has calm and stoic mannerisms.

In the Allied perspective, all of mainland Europe, except for Denmark, Netherlands, Belgium and Western Germany are occupied by the Soviet Union and the British Isles are under attack by General Krukov's armada. However, the Allied commander defends the English coast and Ackerman sends Special Agent Tanya to support the commander in his mission to liberate captured Allied leaders in Cannes, France. Emperor Yoshiro delivers his ultimatum to Allied leaders and blocks all naval traffic in the Atlantic Ocean by the massive floating fortresses.

Field Marshal Bingham allies with Premier Cherdenko to defeat the Empire of the Rising Sun, but Ackerman is angered to the brink of insanity, because the pact between the Allies and Soviets mocks his anticommunist policies. Believing the Soviets are plotting to betray the Allies, the president decides to destroy the Soviet Union by levelling Moscow with his so-called "Super Secret Weapon", located and controlled in Mount Rushmore. Premier Cherdenko threatens to dissolve the pact and attack the United States if Moscow is obliterated, forcing the Allied commander to destroy Ackerman's base in the operation "A Monument to Madness". In this mission, Ackerman attempts to initially transmit the launch code via a communications tower to fire the superweapon but the Allied Commander destroys the communications tower, forcing the mad president to hurry to his superweapon's control center by his limo. During three points of this mission, Ackerman activates the other three presidential heads' ability to fire a powerful laser that destroys almost anything on the ground. The Allied Commander has the option to capture the heads' control centers with an engineer each if they wish to prevent the heads from firing. Eventually, the Allied Commander has built enough forces (along with the co-commander) to bring down Ackerman's base along with the superweapon's control centre.

With the destruction of the base, the superweapon is deactivated, but the president attempts to escape. Bingham instructs the commander to eliminate Ackerman, because the president has endangered world peace. Ackerman's limo/chopper (if the President escaped into the latter) is shot down by the commander, killing him instantly. However, his belief that the Soviets plot to betray the Allies came true when the USSR abandoned the Allied assault on Tokyo and instead was prepared to strike at the Allies in the undefended Allied cities from Havana in Cuba. Ackerman is succeeded by his Vice President, who admits that Ackerman had betrayed us and was willing to kill millions of innocent civilians, but "only because he was trying to protect us".

In the Soviet perspective, Howard T. Ackerman is the newly-elected President of the United States. In his inauguration speech, Ackerman introduces a bill that will quintuple the American war effort to assist their allies in Europe. Premier Cherdenko dislikes the new American president, considering Ackerman as "an ignorant fanatic who wants to wipe us [the Soviets] off the face of the Earth".

In the last operation, "Blight on the Big Apple", the remaining Allied forces have retreated to the United States. With the death of Robert Bingham, Europe occupied by the Soviet army and the fall of the Empire of the Rising Sun, Ackerman is the last notable Allied leader and has deployed his forces to defend New York. However, the Soviet commander defeats President Ackerman and topples the Statue of Liberty. In the end, the United States is conquered by the Soviet Union and the Statue of Liberty is rebuilt as V. I. Lenin's statue.

In the Japanese perspective, it is revealed that Howard T. Ackerman was, in fact, a sophisticated android spy developed by Crown Prince Tatsu to monitor the United States and encourage the Allied nations to attack the Soviets. The president is controlled from Tatsu's command center in Japan. Emperor Yoshiro admits that Tatsu's android spy has "proven very useful".

The Emperor and Tatsu use Ackerman to watch a conversation between Field Marshal Bingham and the Soviet scientist Gregor Zelinsky. Zelinsky explains that the existence of the Empire of the Rising Sun was the result of a Soviet time machine, used to travel back in time to change the past and the future. The shocking revelation enrages Yoshiro, causing him to damage the equipment used to control Ackerman's actions. As the result, Ackerman malfunctions and the Japanese lose contact with the president. Ackerman is never mentioned or seen again, suggesting the android went offline and was permanently shut down. 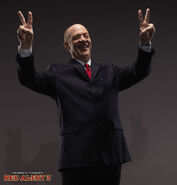 Ackerman campaign poster
Add an image to this gallery 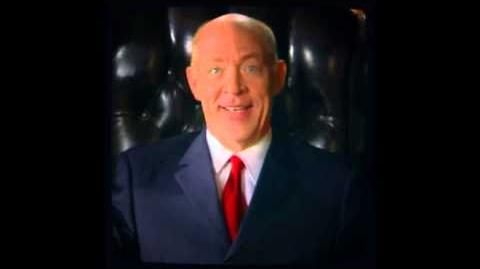 Retrieved from "https://cnc.fandom.com/wiki/Howard_T._Ackerman?oldid=245319"
Community content is available under CC-BY-SA unless otherwise noted.