The Howitzer is a cut artillery unit from Red Alert 2. According to the residual rules.ini data, it was supposed to be an Allied vehicle, available to South Korea only. Its INI data and voxel were left in the game, making it possible to place this tank in a map using FinalAlert or fully return the unit to the game by INI editing.

Its voxel model was inspired by the mobile artillery from the original Red Alert, and was likely modified into the German tank destroyer, and the main difference, besides the colour scheme, is the angle of the cannon. The tank was created using the Soviet scheme, however, and all its voiceover sets (save for the selection) were shared with the Allied Destroyer and the selection set is shared with the Grizzly battle tank. Its artillery role was taken by the prism tank, while its South Korean exclusive unit role was transferred to the Black Eagle jet.

The Howitzer appeared in the version 2.0 of Mental Omega as the French Demolisher Artillery, and revamped in 3.0 as the Pacific Front Zephyr Artillery.

There is also an Allied-colored scheme in C&C Reloaded (not available normally, can be enabled via INI editing).

The Howitzer makes an appearance as its namesake in Colony Wars in the Allied Eagle Command subfaction.

The Howitzer is modeled after the M110 howitzer. 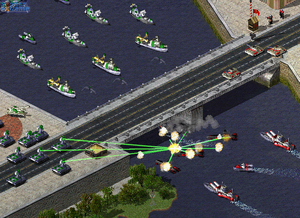 A teaser screen shot from September 2000, showing the Howitzer and Hydrofoil 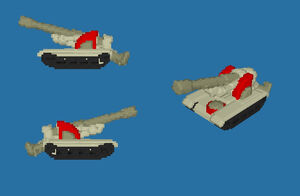 Voxel Model Render
Add an image to this gallery
Retrieved from "https://cnc.fandom.com/wiki/Howitzer?oldid=226828"
Community content is available under CC-BY-SA unless otherwise noted.