Decreased the price and build-time of vehicles, ships, and aircraft by 25%

The Industrial Plant were large factories used by the Soviets during the Psychic Dominator Disaster for better economic efficiency.

Industrial Plants decreased the price and build-time of vehicles, ships, and aircraft by 25% by streamlining the production process with robotic construction drones which could build far faster than any human worker, and by removing the need for some human worker shifts allowed for less pay being diverted to the workers, in addition to making more effective use for materials allowed for cheaper and faster production.

In fact some say these won the war against Yuri, allowing the Soviets to pour out more tanks than Yuri's mind control could handle. They certainly did make a large impact upon Soviet tactics once built, changing from smaller numbers of superior units to vastly larger numbers of superior units, finally giving the Soviets the quantity advantage as well as the quality advantage they always had.

However, for all their effectiveness their specialization prevented the plants from affecting structure and defense construction, and the Psychic Dominator Disaster ended before a construction version could be built.

Oddly, this somehow affected the price of dolphins and giant squids. One possible explanation is that the Plant decreases the cost of the sonic and mind control equipments needed to equip these creatures.

During the War of Three Powers, the Industrial Plant is not deployed on the battlefield but the Mass Production Top Secret Protocol provides similar effects.

This building allowed Soviet vehicles to outnumber their rivals as they became cheaper than their rivals. For example, the Rhino tank became noticeably less expensive than even the Lasher Tanks, which allowed great hordes of Soviet vehicles to pour from war factories. However the bonus will also apply to war factories and shipyards from all other factions that the commander with the industrial plant controls. Some lucky Soviet commanders who had an Allied base would have Ore purifiers to allow even more tanks to pour out of the production lines, combining the extra ore credits with the reduced vehicle, ship, and aircraft cost to improve efficiency by "50%". Likewise the same goes for Allied commanders who also have access to Soviet Tech and the Industrial plant.  Additionally the costs of more high tech and expensive units like Apocalypse, the MCV, the Dreadnaught and the Kirov airship will be much easier to swallow.

Another benefit is that because it reduced the cost of War miners, the Plant also reduced the cost of Ore Refineries, although the cost reduction was applied to the miner that came with the refinery. If a Soviet commander were to gain Yuri construction capabilities, Slave Miners produced by the Yuri construction yard wouldn't receive a cost reduction, while (oddly enough), Slave Miners produced by Yuri's own War Factory would. 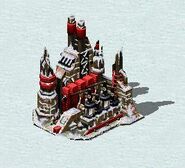 Retrieved from "https://cnc.fandom.com/wiki/Industrial_Plant?oldid=242569"
Community content is available under CC-BY-SA unless otherwise noted.