The Escape from Earth

Investigating the Source is the third mission of the Scrin campaign of Tiberium Wars.

The Scrin had finished constructing the Relay Node and were in progress of constructing the Threshold towers. But having been surprised by a heavily militarised indigenous population and premature Ichor contamination levels, the Overlord began to get suspicious of the premature explosion. The Supervisor ordered Foreman 371 to investigate the blast site and find any information regarding how and why the explosion occurred.

The Mothership AI located the blast site in Croatia, where it was still relatively left undamaged by the explosion. When Foreman 371 arrived at the area, Nod and GDI were already engaging each other to destroy one another. The Scrin secretly constructed a base near the decayed town and built up their defenses while the two indigenous factions fought each other. However both armies detected alien presence and soon besieged their new enemy with Avatar Warmechs, Mammoth Tanks and Juggernauts.

The Scrin's primary goal was to capture a Nod intelligence building, not destroy Nod and GDI. However both sides were becoming too much of a nuisance. To ease pressure on themselves, the Scrin built up an army of Annihilator Tripods and captured husks supported by their Stormriders. Foreman 371 created a wormhole at the back of the GDI base and teleported his army into the GDI stronghold. Despite the presence of Sonic Emitters, the GDI defenders were overwhelmed and were soon slaughtered by the aliens.

With GDI out of the way the Scrin pressed their advantage and soon besieged the Nod defences. Nod was able to hold back the aliens slightly longer than GDI but they too were soon overwhelmed by the Tripods and the Stormriders. While the ground forces were wiping out the base, the Stormriders destroyed the three Obelisks of Light guarding the intelligence building, clearing the way for an Assimilator to infiltrate the building and hack into Nod's databank.

The captured information was relayed to the Supervisor. In it was a captured transmission between a Nod commander and a being called Kane. The Scrin soon realised that the explosion was made intentionally by Kane to draw the aliens to Earth and capture their Tiberium-related technologies. To make things even more shocking, Kane already existed in the Scrin's data core but his origins were unknown to them. At this point, the Mothership AI informed Foreman 371 that all 19 Threshold assembles were under direct attack...

The mission theatre menu highlights the location in Zagreb, while the cutscene shows it in an undisclosed place in the south of the country, but this is hard to tell, as Croatian territory in that region is very narrow, giving the possibility of the mission to be located a few kilometers inside the territory of Bosnia and Herzegovina. The same cutscene highlights Croatia merged with Bosnia and Herzegovina, giving it a very strong resemblance (but not a fully identical appearance) to the fascist-controlled Independent State of Croatia in its 1943 form (minus western Vojvodina and plus Istria and Baranja). 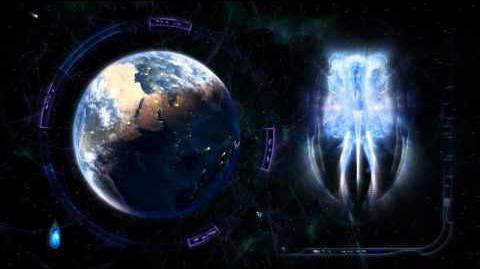 C&C3 Tiberium Wars - Scrin 03. Lured Into a Trap
Briefing
Add an image to this gallery
Retrieved from "https://cnc.fandom.com/wiki/Investigating_the_Source?oldid=229791"
Community content is available under CC-BY-SA unless otherwise noted.