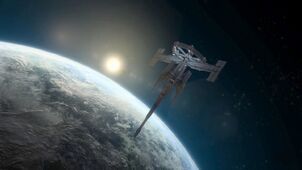 The Ion Cannon in orbit

The orbital Ion Cannon is a satellite-based particle beam weapon system developed by the Global Defense Initiative. It allows the delivery of powerfully accurate and strategic strikes at almost any location on Earth.

Each Ion Cannon (part of the Orbital Defence Matrix) circles Earth on a geosynchronous orbit. It has become the signature weapon of the Global Defense Initiative ever since its introduction during the First Tiberium War. It is capable of obliterating any location on the world with a precise, calculated strike of unforgivingly destructive power.

Approved by the UN in 1996[1], the development of the Ion Cannon was led by the talented Doctor Wong Hu Chan. The weapon's potential was deemed a sufficient enough threat to the Brotherhood of Nod that Kane ordered the doctor's assassination. This was duly carried out by Nod forces. Despite the loss, development continued and the weapon system entered service by the end of the First Tiberium War. The advent of the Ion Cannon corresponded with a promise by GDI never to use nuclear weapons.

An advanced communications center at field bases provided operational commanders with a secure control uplink to the Ion Cannon. A queuing system was introduced to manage the demand for the deployed systems, and this practice continues.

The GS-2 beacon was developed for troops to request strikes in the field. One was used to penetrate the Temple of Nod in Cairo. The resulting Ion Strike cracked the Temple's reinforced defenses, allowing the commando, Nick Parker, to penetrate the temple's perimeter.

The most notable use of the Ion Cannon during the First Tiberium War, was when GDI assaulted the Sarajevo Temple of Nod, where Kane was barricaded inside. GDI obliterated the Temple, and seemingly Kane, in one strike.

Nod attacked a GDI base in Botswana and captured the Ion Cannon security codes from an advanced communications center there. Using these codes, Netwarriors operating from a South African Temple of Nod, infiltrated GDI's orbital defense matrix and gained access to the Ion Cannon. The weapon was then used to destroy a notable Western landmark. The first generation Ion Cannon has the appearance of a large-width beam of light with no distinct color.

A single-beam weapon was most common during the Second Tiberium War. The uplink for operational commanders was mounted on the Upgrade Center. The weapon had a bit larger area of effect, capable of taking out multiple enemies if close to one another.

For security purposes, the Ion Cannon control codes were divided into three parts and stored at three separate Upgrade Centers at a facility near Hammerfest. These measures were considered "paranoid" by the Nod AI, CABAL, but given the hacking of the Ion Cannon during the First Tiberium War, this is understandable.

The Ion Cannon is the superweapon support power for the GDI. It's an extremely powerful weapon capable of turning the tide of battle that can be fired anywhere on the battlefield, even if the target zone is covered by the fog of war. Only a Construction Yard, Drone Platform, Mothership, or other superweapon buildings can survive a direct hit if they are at, or near, full health.

The orbital Ion Cannon network was well established by the Third Tiberium War. The battlefield uplink was accessed through an Ion Cannon Control Center.

The type of system deployed had at least two firing modes. The first was commonly used against ground targets; initially eight secondary beams arranged in a circle gradually spun inwards until they joined at the center, damaging targets inside the circle and ionizing the air they passed through and rendering it combustible. After that, the primary beam fired and detonated the ionized air in the target area, causing a massive blast both inside and outside of buildings and vehicles. This was the first version of the Ion Cannon with a sufficient area of effect to level entire bases in a single strike. The second mode dispensed with the secondary beams altogether, designed as a more accurate tactical weapon, capable of hitting small, fast-moving targets. This was used to detonate the Liquid Tiberium Bomb at Temple Prime, to fragment Scrin ships into Drone Ships headed toward Earth, and was capable of destroying missiles aimed at GDI spacecraft.

The satellites were integrated into GDI's A-SAT system. In the lead up to the Third Tiberium War, the Brotherhood of Nod surmised GDI's dependence on the Ion Cannon networks was a critical weakness. The Nod AI, LEGION, raided the Johannesburg research facility and stole the plans for the Ion Cannon network. From those, Nod identified a critical point in GDI Space Command's control over all of the orbital weapon systems, including the Ion Cannons; the entire network was directed from a single ground side location at Goddard Space Center. A Nod attack on Goddard disabled the A-SAT system and the Ion Cannons, leading to the destruction of the GDSS Philadelphia.

Ion cannons were powerful enough to destroy incomplete Scrin Threshold towers once the protective Phase Generators were disabled. To date, this version of the Ion Cannon makes it undeniably the most powerful superweapon in the entire history of the series.

The Ion Cannons in service during the Ascension Conflict introduced increased flexibility. The power of the Ion Cannon's blast was determined by the time it had to charge between uses. There were six discharge levels, with each succeeding level producing larger blasts and EMP effects.[2]

Doctrinal changes stemming from the Incursion War delegated battlefield Ion Cannon deployment to the defense branch. Also, it appears that some, if not all, Ion strikes actually originated on the surface, being fired from a ground-based generator bunker at an orbital mirror that would reflect them back down to the target.

The cannon fires a single beam with an internal damage value of 600, which is exactly enough to destroy an Advanced power plant. Note that the original game (before the fan-made patch) has a rounding error on weapons doing large amounts of damage, because warheads doing "100%" to certain armor types actually have this value stored as "255/256" (99.6%). This bug prevents the Ion Cannon from completely destroying an Advanced Power Plant. The Ion Cannon has a chance to cause a fire in the affected structure, though, in which case the gradual burn damage could still finish off the building.

The Ion Cannon's area of effect is more or less a 3x3 '+' shape, with the center cell receiving the most damage, and all cells around it, primarily those directly perpendicular to the center, receiving spread damage from the weapon. Due to the way weapons and damage spread works in the original C&C game engine, a large building targeted by the weapon would only receive the primary damage, without the additional spread damage, even if it would technically affect other cells of the same building. This makes it more efficient to target the edge of a building, so that the spread damage can be inflicted on other nearby targets.

Each cannon strike causes 751 damage, dealing full damage to all armor types, and has a 100% chance of deforming the terrain. The strike deals splash damage; the damage inflicted is halved for each 40 pixels the target is from the target point.

Whenever the Ion Cannon was used, 8 beams would appear and start moving counter clock-wise causing damage and debris to to temporarily float in the ionized air, this process also seems to make the air around the target combustible, once the 8 secondary beams reach the center there's a slight delay before the primary beam is fired and detonates on the target. The third generation Ion Cannon was the most powerful, capable of obliterating entire bases except for the Construction Yards and Superweapon buildings, which still took significant damage. It had a splash radius almost the size of the screen, and dealt equal damage over its whole radius. Unlike its older models, airborne units can be damaged by the blast.

This new version of the Ion Cannon also has the ability to shoot targets outside of earth's orbit, allowing it to shoot down any missiles attempting to strike any GDI satellites or other targets prioritized by GDI head command. This was demonstrated when the Ion Cannon network in the southern hemisphere fired at the incoming alien objects to Earth, following the liquid Tiberium explosion at Temple Prime.

The Ion Cannon has six nodes that charge sequentially. It takes three minutes to charge all six. The number of charged nodes determines the weapon's power. More nodes also add EMP effects. The maximum charge "decimates" small and most medium-sized units in the blast and cripples survivors with an EMP for a significant length of time. Achievements can be earned if the player launched a fully charged Ion cannon and if they destroy 20 units with it.[2]