Only one may be built at a time

The third-generation Ion Cannon Control Center was a bunker-like superweapon structure that was developed by GDI just before and used during the Third Tiberium War.

The Ion Cannon is a weapon of unprecedented destructive power and far outclasses Nod's nuclear missiles. The first versions were crude and relatively weak, no more than laser scalpels compared to those used in later conflicts. Two dozen exist aboard platforms in medium Earth orbit and are controlled by a sophisticated communication matrix that can fire them in unison at a single location for maximum effect, or target separate locations for tactical strikes.

First developed in the years preceding the First Tiberium War and then used during the conflict, the astronomical power of the Ion Cannon has since become GDI's greatest offensive asset. It fires several beams of concentrated energy that measure only centimeters across but can melt the densest metal, vaporize organic tissue and shatter Tiberium crystals. After that, they spiral in toward the target point and merge into a larger, more powerful beam at the center of the target area before the colliding ions trigger a controlled but extremely violent exothermic reaction fifty times more powerful than the atomic bombs that destroyed Hiroshima and Nagasaki. 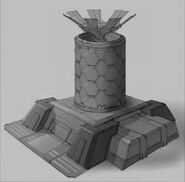 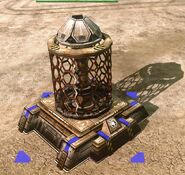 The Ion Cannon Control Center extends itself when the Ion Cannon is charged and ready to fire
Add an image to this gallery
Retrieved from "https://cnc.fandom.com/wiki/Ion_cannon_control?oldid=237538"
Community content is available under CC-BY-SA unless otherwise noted.