Lieutenant General Jack Granger is GDI's highest ranking military officer in Tiberium Wars after the destruction of the Philadelphia.

Granger has over 28 years of combat experience, making him a veteran of the Second Tiberium War[1]. He was stationed at InOps at the beginning of the Third Tiberium War. Pragmatic and disciplined, Granger is known to be stubborn and persistent with his ideals but also honorable and believes in the proper conduct of war. While the rest of GDI believed that the Brotherhood of Nod was no longer a threat, Granger remained wary and insisted that so long as Tiberium existed on Earth, Nod would always be a danger. His aide was Lieutenant Sandra Telfair.

While capable of shouldering great responsibility, Granger also understands the need for a proper chain of command. Thus despite his distaste for many of acting Director Redmond Boyle's orders, he carries them out dutifully. However, that sense of duty also results in Granger acting unilaterally should the situation call for it. Granger viewed the idea of GDI resorting to Tiberium weapons as unacceptable, believing it would result in GDI becoming no better than the Brotherhood it sought to defeat. [2]

GDI General Zachary Harkin once said "Jack's never been happy unless he has something to worry about."

Granger is the player's commanding officer. His ultimate fate depends on the choice the player makes in the final mission: If the Commander chooses not to use the Bomb he will be called a hero and General Granger will also explain- more than a little cheerfully- that Boyle has resigned to avoid trial for war crimes over his authorizing the use of the Tiberium Bomb.

Alternatively, if the Commander decides to use the Tiberium Bomb, General Granger resigns in disgust, declaring he has no desire to serve in a force that is willing to compromise its own ideals. Leaving his post for good, he tells the Commander that while victory has been achieved, he sincerely hopes the Commander will have to live with the cost for the rest of his life.

Lt. General Jack Granger is portrayed by Michael Ironside, known for such movies as Scanners, Total Recall and Starship Troopers. He is also known for his work as a voice actor, having played Sam Fisher in Tom Clancy's Splinter Cell videogames and Darkseid in Superman: The Animated Series and Justice League. 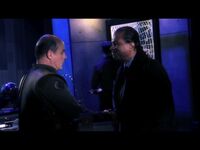 Retrieved from "https://cnc.fandom.com/wiki/Jack_Granger?oldid=231939"
Community content is available under CC-BY-SA unless otherwise noted.