Jarmen Kell And The Forty Thieves

Western coast of the United States

Jarmen Kell and The Forty Thieves is the penultimate mission in the GLA campaign of Command & Conquer: Generals Zero Hour.

The destruction of USS Ronald Reagan was overwhelming, as the American fleet in the Mediterranean sinks to the bottom of the sea. The crushing globe by the GLA had led a serious revaluation to its global reign of victory. With rumours that America will end war crime trials against GLA activists and military personnel would pull its forces from Europe altogether. That day will mark a GLA victory, many have waited for. The report was made by ARC News and said by Omar Bin Ghazali.

Jarmen Kell and some Hijackers (team one) landed on a nearby beach by a PT Boat while some rebels and another group of Hijackers (team two) landed on the mainland to wait for further orders and capture a Tech Hospital. The mission objective was to seize a chemical plant and transport 20 drums of toxins to a nearby aeroplane, bound for take-off.

The Raid in Action

Team one managed to hijack a Crusader tank and two Humvees, and also captured an unfortunate ferry. The ferry transported team one to another beach on the mainland. However, the beach was mined with Demo Traps so team two had to find a Radar van to allow team one to make their way through the minefield safely. Team two found three Technicals, west of the Hospital after taking out three patrolling Humvees had found a Radar van at the local TV station. Team two also located a local GLA cell operating inside the US mainland, which agreed to aid the team in its mission.

The Radar van provided scans of the beach, allowing team one to proceed safely along the shore. Eventually team one took control of an abandoned Paladin tank and eventually liberated a POW camp. The camp allowed team one, a good lookout to bombard the bridge defenses blocking team two's path and proceeded to take over the two Tomahawk launchers and a Tech Artillery Platform.

As team one's Tomahawks made short work of the bridge defenses, two Raptors took out the launchers. GLA intel spotted an Airfield near team one's position, but their access was blocked off by a reservoir operating at full capacity. Team two rushed in and captured a valve station. A Rebel managed to pump the water out of the reservoir, allowing team one to proceed. They quickly bombed the Airfield, taking out homeland security's air support in the area. Team one also gained a division of Toxin Tractors, which would prove useful in clearing any garrisoned bunkers protecting the chemical plant.

However, the chemical plant was defended by Patriot missile systems as well, even the runway if the plane was going to escape the US mainland. All were powered by a group of Cold fusion reactors that were undefended. Team two, now with fully upgraded Technicals, destroyed the reactors, bringing the missile batteries offline.

As the toxins were loaded onto a captured American plane, the Homeland security forces, soon got word of a GLA raid and sent a force to defeat the incursion. The GLA found four Quad Cannons to drive off any potential air assaults while Rebels and RPG troopers garrisoned themselves in the bunkers.

Any remaining Hijackers were placed strategically in areas, surrounding the chemical plant to hijack oncoming US vehicles while Terrorists rigged up car bombs as a last resort. Homeland security soon arrived in waves, and in force as they attempted to drive the GLA back to the sea. Each wave was successfully countered and a number of US tanks were hijacked for GLA use.

Finally, as the GLA positions were weakening with each wave, the required amount of toxins were on board the plane. Teams one and two retreated to the plane but it was too slow to take off before the Americans could destroy it. Team two (now consisting of Rebels) heroically decided to remain behind and defend team one's escape with the plane. Team two fell alongside the Rangers, but bought enough time for the plane to take off whilst under shell fire. Since their only airfield in the area was destroyed by the GLA, the plane successfully escaped.

While the Global Liberation Army cheered, the plane had arrived home and with all twenty samples of toxins, they are ready to tackle the US Central Command in Stuttgart, Germany with their Scud Storm. The People's Republic of China wasn't sure about what happened as the Americans pulled thousands of troops out of Europe in defending their homeland. Their President said that GLA forces entered US mainland without notice and after their mission was done, they showed to the world what America had done and constantly mocked by protests.

Team One: Jarmen Kell must use his Sniper Attack ability to eliminate the US vehicles guarding the ferry. Capture them and board the ferry. The ferry unloads your force on the shore.

Team Two: You must capture the Tech Hospital to heal your troops. Then ride the Technicals on the scene. Either destroy or capture the Humvees roaming around the village. Then capture the Radar Van in a TV station. Meet up with the local cell in the area.

Team One: Detect the Demo Traps and use the captured forces to destroy it. Jarmen Kell must use his ability to disable the Paladin and the 2 Tomahawk Launchers on the cliff,near a POW camp. Use that to eliminate the US Patriots on the bridge.

Team Two: Let a GLA unit to enter the floodgate facility nearby to make a pond accessible and to capture the Toxin Tractors to clear out US forces garrisoned on the cliffs and to secure the Airfield. Then capture/destroy the Cold Fusion Reactors to bring the area's defenses offline.

Team One: They must clear out the cliff and either capture/destroy the Airfield (former is much practical).

Meet up on the area, clearing out the garrisoned US forces defending the area. Liberate the rest of the POW camps to bolster your forces. Then continue to secure the Toxin Factory. Capture the Artillery Platform and garrison the buildings near the area, in order to delay the US counterattack.

You must get 20 trucks full of toxins. Every destroyed truck will be replaced by another one. If the three trucks are destroyed, the player loses, even though new trucks are appearing.

NOTE: At the third POW camp, you must destroy the barrels to reveal two Hijackers, as traitors. 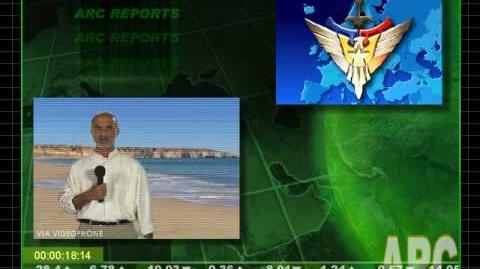 C&C Zero Hour - GLA 4 - Jarmen Kell And The Forty Thieves
Mission brie
Add an image to this gallery
Retrieved from "https://cnc.fandom.com/wiki/Jarmen_Kell_And_The_Forty_Thieves?oldid=221893"
Community content is available under CC-BY-SA unless otherwise noted.