Must deploy to fire

The first-generation Juggernaut was a GDI artillery walker that entered service during the Firestorm Crisis.

After analyzing battle data from the Second Tiberium War, GDI came to the conclusion that its forces lack a long-range fire support unit. To address this issue, technicians combined a modified Titan delivery system with ship-based artillery technology. The result was the Juggernaut.[1]

Like contemporary Nod self-propelled artillery, the Juggernaut had to deploy stabilizers out of its rear and become stationary prior to firing. Each of the walker's guns was smaller than the single gun carried by its Nod counterpart, but the larger number of guns allowed the Juggernaut to better saturate a target area. When deployed, the turret can traverse 360 degrees, ensuring all around security. The Juggernaut is notably faster in mobile mode, compared to Nod's artillery.

Like all walkers of the period, the Juggernaut emerged from the conflict with mixed reviews. GDI found the all-terrain mobility conferred by walkers to be offset by the expense of construction and deployment.[2] However, while other walkers were withdrawn from service, the Juggernaut and its descendants remained essential parts of the arsenal.[3] As indirect combat vehicles GDI decided the all-terrain mobility outweighed the costs.[2]

After the Firestorm Crisis, the Steel Talons division designed the second iteration of the Juggernaut, called the Behemoth. By the Third Tiberium War, this iteration was adapted to the newer Juggernaut, used by regular GDI regiments.

The Juggernaut serves as a mobile artillery gun, possessing great range and power that make it perfect for siege warfare. Despite its imposing appearance however, the Juggernaut is surprisingly vulnerable to most forms of attack, especially anti-armor weaponry. On top of this, it is fairly slow moving. These two vulnerabilities combined bestow the Juggernaut with the necessity to be protected either by friendly units or a healthy amount of distance from its targets.

The Juggernaut cannot fire while mobile; in order to use its powerful artillery guns, it needs to plant itself in the ground first, a process which takes around two seconds to complete. Once implanted, it can and will fire at any target inside it's attack radius; in order for it to attack anything outside that radius, it must rise back up, move to a close spot, and then plant itself again.

Their attack is weaker than that of their Nod Artillery counterpart, but has a wider dispersal, and is best used against crowds of enemy infantry. While it is useful against infantry or even light armor, it is not very effective against heavily armored units or buildings. However, it has a significantly greater attack radius than Nod Artillery: considering that Nod Artillery has eggshell-thin armor, this means that artillery battles in Firestorm now become very lopsided. It is now extremely difficult for Nod Artillery to attack GDI bases defended by Juggernauts. Further, Nod bases which were once securely defended by entrenched artillery can now have them destroyed from a distance by Juggernauts. While Juggernauts are not useful against heavily armored units, Nod technology doesn't focus on heavy armor: only Tick-tanks can withstand a barrage long enough to try to rush their positions. However, the Tick-tank is infamously outclassed by the GDI Titan walker. It is now extremely difficult for Nod to counter a GDI assault force composed of Juggernaut and Titans. They are still weak against air units, and here there is something of an advantage because Nod's basic infantry have anti-air capability that GDI's Disc Throwers do not. However, while a bit more expensive, Jump Jet infantry or Hover MLRS can still cover the advance. For that matter, air strikes in Tiberian Sun are not particularly effective against large numbers of units, so a sufficient number of well protected Juggernauts can eventually grind down a Nod base from outside their firing range. 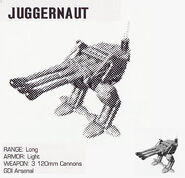 Render of Juggernauts attacking a Nod base in deployed mode

Retrieved from "https://cnc.fandom.com/wiki/Juggernaut_(Firestorm)?oldid=220770"
Community content is available under CC-BY-SA unless otherwise noted.