5 seconds to deploy, 2 seconds to pack.
The Juggernaut is an epic GDI vehicle class tech walker in Command & Conquer: Rivals, It is an artillery unit that can fire 3 tiles away, with splash damage that affects every neighboring tile to the target one.

GDI's fearsome Juggernaut is a heavy artillery walker sporting naval artillery and a modified Titan chassis. The Juggernaut's triple cannons allow it to blanket a large area with artillery fire from far behind the front lines. This awesome firepower is somewhat offset by the Juggernaut's relatively light armour and long pre-fire setup time.

The Juggernaut is a long-range artillery unit that does great splash damage to both infantry and vehicles. When shells hit the ground, they damage not only the tile that the unit is on but also the adjacent tiles, making it difficult to rush many cheap ground units against it. Quick turn speed and fire rate make it difficult to flank it as well.

Juggernaut is very effective against structures, but the sluggish movement speed and long deployment time makes it too vulnerable to quick counter-attacks unless there is total map control, at which point there is no need to attack the base directly.

Juggernaut can't target units that are directly adjacent to it to avoid damaging itself.

Since the Juggernaut can shoot father than it can see, it requires a scouting assistant, preferably an airborne anti-air unit like Hammerhead. Without a scout, a medium armour unit can close the distance with the Juggernaut and then attack it with impunity.

The main threats to the Juggernaut are anti-armour aircraft and the Stealth tank. The latter requires infantry to detect, so another option to defend the Juggernaut is to pair it up with Zone troopers. They come from the same building, can attack aircraft, can detect stealthed units, and can heal up if they get damaged from the friendly fire.

When moving to attack 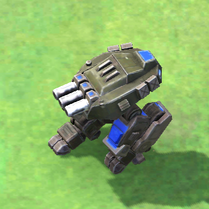 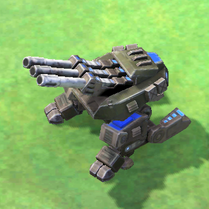 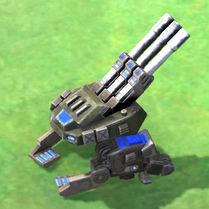 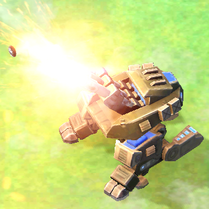 Mesh
Add an image to this gallery

Retrieved from "https://cnc.fandom.com/wiki/Juggernaut_(Rivals)?oldid=240972"
Community content is available under CC-BY-SA unless otherwise noted.