The Juggernaut is a GDI Defense-class artillery walker in Tiberian Twilight. Unlike previous incarnations it may mount a mortar launching sticky bombs.[1]

A direct descendant of the TWIII-era Juggernaut, the new Juggernaut is a next-generation walker, boasting shortened, but just as accurate cannons and an optional sticky bomb upgrade. With more finesse than its ancestral models, the Juggernaut maintains its role as GDI's mobile artillery platform, with new emphasis on mobility.

It functions as a heavy artillery/minelayer which is very effective against clustered enemy units and does not take up a lot of command points allowing several juggernauts to bombard the enemy from afar. Like the Tiberian Sun version, it fires its shells in an arc, but unlike the Tiberium Wars version, it does not need to unpack. Unlike previous versions however this Juggernaut does not leave a husk when killed, a security mechanism to prevent acquisition of the technology by Nod Engineers.

An achievement can be earned if the player use the Juggernaut to destroy many units with Sticky Bombs. 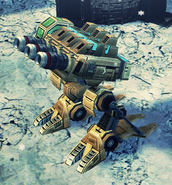 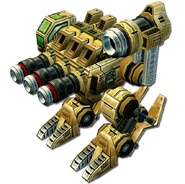 Retrieved from "https://cnc.fandom.com/wiki/Juggernaut_(Tiberian_Twilight)?oldid=237651"
Community content is available under CC-BY-SA unless otherwise noted.