They are equipped with a back mounted jetpack unit with an integrated chaingun cannon (though battlefield recon videos suggest a mounted M16 Mk. II automatic rifle). They are approximately as costly as cyborgs to produce and maintain, and equally useful.

In-flight casualties among jump jet troopers led to upgrades to the jump suit after the Second Tiberium War. [1] These upgrades were mostly oriented on the jump suits, including stealth detection systems, additional body armour and an upgrade to the thrust power of the suits' jump jets, increasing air speed.

The jump jet infantry were not seen after the Firestorm Crisis.

Jump jet infantry attempt to land at the end of every flight or after destroying a target while hovering. The infantry move and attack on foot if ordered to move or attack something a short distance away. Considered a second tier unit, they are available once GDI's Radar station becomes operational. They are effective against any ground unit or structure that cannot defend itself against aerial threats. They are able to fire at aircraft. Their chain gun is lacking in firepower, so they are only effective when used to attack in massive numbers and are vulnerable to Hover MLRS, Elite Attack cycles, SAM sites, Rocket infantry, the Mammoth Mk. II and the Stealth tank. In fact, it takes a group of 6 to take on a cyborg reaper on a Tiberium field. Even then, the group will likely be destroyed, costing the GDI commander 3000 credits, while costing the enemy a mere 1,110 credits. These soldiers can also be used for expendable recon, as they can reveal the shroud without being hindered by any terrain. They are considered to be the least mobile air unit in Tiberian Sun. 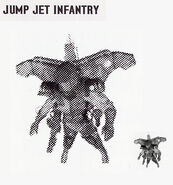 Rocketeers from Red Alert 2 are based on this unit, albeit flys much faster and are permanently airborne.

Retrieved from "https://cnc.fandom.com/wiki/Jump_jet_infantry?oldid=231167"
Community content is available under CC-BY-SA unless otherwise noted.