Prince Kassad is a GLA General during the War against the GLA.

The 34 year old[1] Prince Kassad has cut a dashing figure across Middle Eastern politics and a violent one in the underworld. This charismatic tribal leader has organized spies and assassins across North Africa to do his bidding. Prince Kassad has been paid millions for assassinations, hijackings, and beatings in the street. For a three-year stretch beginning in 2008, it is believed that no terrorist action was taken on the shores of the Mediterranean Sea without his involvement or blessing. A clever administrator of a serpentine organization, he has never been directly tied to any criminal activity, yet bad things continue to happen to individuals and forces that stand in his way.[2]

Hailing from Tripoli, Libya, Kassad was aligned with the Cobra Cell of the GLA. The majority of his combat abilities are focused on stealth.[2]

Following the defeat of Dr. Thrax, the charismatic Kassad was one of the first to exploit the new power vacuum. However, he reckoned without the forces of those loyal to 'Deathstrike'. An unknown, yet highly skilled general who assisted and followed Deathstrike successfully defeated Prince Kassad at his headquarters in Cairo, Egypt, taking from him his GPS Scrambler and Sneak Attack technologies. It is assumed that he is dead at the end of the second GLA campaign mission or maybe captured possibly depending on whether the GLA commander chooses to capture or destroy his main command center on top of the cliff.

While Prince Kassad was not able to attack his opponents head on, his abilities to sneak in and out of poorly defended bases, or set up other bases on the map undetected, made him a very frustrating opponent to fight. Unlike like any other general, his super weapon can be hidden, only briefly being seen after construction before being able to be cloaked. A specialized general, Kassad's stealthy tactics brought immense frustration and headaches to commanders who lacked sufficient countermeasures. In preparation for his next opponent, he'd litter the battlefield with Demo Traps to put them on edge.

Kassad also made full use of Hijackers to turn his enemies' vehicles against them, making use of frequent travel lines to maximize their effectiveness. With the added bonus of being stealthed, those without stealth detection risked being caught by this strategy.

However once Kassad's forces are detected, they are weaker than most of what the GLA has to offer. Bases that were heavily defended from his stealth attacks were often out of reach, as he lacked the firepower to generally swarm effectively, and doing so often neglected his strongest asset of being sneaky. His defenses are often meager but having them spread across the map could discourage potential flanking tactics.

He always had major trouble with Shin Fai, who was capable of protecting his base's perimeter with mines along with the Attack Outpost and Assault Troop Crawlers; Both had considerable stealth detection range and could be outfitted with enough firepower to dispatch most of what Kassad had to offer. 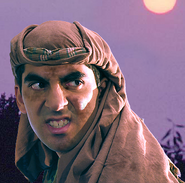 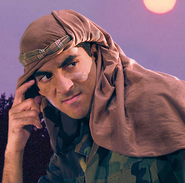 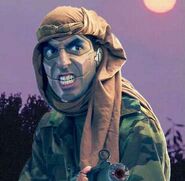 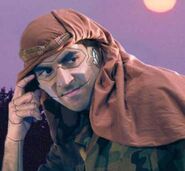 Retrieved from "https://cnc.fandom.com/wiki/Kassad?oldid=246472"
Community content is available under CC-BY-SA unless otherwise noted.