General of the Railgun Division

Katerina "Cleaver" Von Hoftstadter is an EU general expected to appear in Command & Conquer (Generals 2). She specialises in railgun weaponry.

She even holds one of weapons used by her unique unit, the railgun squad.

Raised in the Alb-Donau district in rural Germany, the only girl in a family of seven, Katerina "Cleaver" Von Hoftstadter has long understood the value of holding her ground. A stoic and serious child, she remained untouched by the chaos that surrounded her. Patriotic almost to the point of nationalism, Katerina entered military college and served with distinction on multiple fronts. Less than five years into her career, Katerina became a national hero in what came to be known as the "Siege of Algiers", spearheading a week-long defense of the EU Embassy against massively superior GLA numbers, using a then new deployment of Railgun Tanks. Not a single civilian life was lost, and - following the effusive praises of the ambassador - Von Hoftstadter found herself fast-tracked for promotion. Today she commands the Railgun-centric 8th Mechanized Warfare division. Her patriotism remains undiminished.

As a medium-range general, Cleaver is useful for countering early infantry rushes. 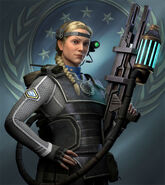 3D Render
Add an image to this gallery

Railgun weapons use electromagnetic force to launch its projectile as opposed to using gunpowder. Railguns are capable of firing its projectile at greater velocity and better accuracy than regular firearms. A downside is the large amounts of energy needed to power it.

Retrieved from "https://cnc.fandom.com/wiki/Katerina_Von_Hoftstadter?oldid=215520"
Community content is available under CC-BY-SA unless otherwise noted.