This over confident officer is famous for his way with sophisticated technology. Kenji was put in charge of field-testing the Empire's newest fighting forces by Prince Tatsu himself, and likely has his affluent family to thank for it.

His family owns Tenzai Robotics, one of the Empire's top defense contractors.

One of the youngest Imperial commanders, Kenji is known within the Imperial forces as an arrogant, lively and hyperactive general. He is nevertheless a true patriot and a loyal servant of the Empire, an important leader within the Shogunate and one of the masterminds of the Imperial Invasion of the Soviet Union. It is his goal to humiliate and crush the Empire's enemies without mercy. If one can gain his respect, he is quite friendly and approachable. Resist him in battle, and he will show you no mercy.

In the Allied Campaign, Kenji attempted to defend Gibraltar from the Allied-Soviet Coalition, but failed, even with assistance from fellow shogunate leader Naomi Shirada. During the Empire's final battle Tenzai Robotics was destroyed by an Allied taskforce. After the Emperor was supposedly killed, the insolent Shogun felt sorrow and bitter anger at the barbarians for this unforgiving murder. After the Allies destroyed the Shogunate HQ in Tokyo, Kenji concentrated his efforts in smashing the last of the Soviets but agreed to Tatsu's terms to back down in favor of the Allies. By the time of the Uprising, Kenji had retreated to his estate in Osaka province.

From the Empire of the Rising Sun perspective, Kenji is a bold and hyperactive high officer. Many of his victories have reflected both pride and cruelty. He is assigned to help the Japanese Shogun to destroy a monument at Stalingrad. During the process of the attack, the Shogun and Kenji defeated and killed Soviet heroine Commander Zhana. Following the victory at Stalingrad, Kenji assists the Shogun in the assault of Odessa. Together they marched on the Soviet fortress and eradicated the Communist army with the Shogun Executioner at their command. This triumph proved to have been a decisive blow crushing a large portion of the entire Soviet army and killing Commander Moskvin.

At the peak of their victory, the Rising Sun attacked the Kremlin to eliminate the Soviet leadership and shatter their Time Machine. Once again, Kenji and the Shogun Executioner tagged along. The young Shogun is overjoyed to witness the oblivion of Premier Cherdenko, General Krukov and their remaining forces.

From the Soviet perspective, Commander Kenji is a relentless and very gloating arrogant Japanese officer who regards the barbarians as inferior and total ignorants. He is first spotted assaulting Leningrad after pushing back a small Soviet force. Premier Cherdenko dispatches the Soviet Commander to deal with the Rising Sun. Kenji resists for a long time but eventually his warriors fell under the lethal sway of fatal Natasha and the rest of his troops are defeated by the Soviet hero and Commander Oleg. However, Kenji warns them that they will see much more of the other shoguns before making his getaway.

Later, the Communists invade Japan aiming to slay Emperor Yoshiro. Kenji is one of the Shoguns to defend valiantly his One Master. Despite his tenacity, Tenzai is vanquished and killed without mercy as he granted none to his foes. His final words say it all:

The Empire's defeat was a wake up call for Kenji who refused to give in to the Allied Forces. He redoubled his efforts to complete the development of new military forces intended for the ultimate defense of the Imperial homeland, including regiments of freshly awakened Steel Ronin.

Eventually, he rebelled against Tatsu. In stark contrast to Shinzo Nagama, who valued tradition, Kenji relied on the latest technologies and armaments for his forces. His base was protected by no less than three specially designed Nanoswarm Hives, each being able to remain active indefinitely without having to power down and recharge. His base also possessed a Allied-made Technology Inhibitor, as well as numerous mechanized forces, including his own personal Black King Oni, which (while not quite as powerful as the Emperor's own King Oni) is a force to be reckoned with.

In the Imperial Mini-campaign, he helped the commander in holding back a large number of Commander Oleg's forces on Sakhalin island. At the peak of been overwhelmed, Kenji emerges triumphant against the superior army of his adversary.

Later on, Kenji betrays Tatsu when he realizes that the Crown Prince still beckons at the feet of the Barbarians. He joins with Shinzo and Takara against the Allied High Command and Tatsu. He is stopped at Osaka and put in a cryo-prison. It remains to be seen if his old friend the Shogun Commander comes to free him along with Shinzo to reform the Empire's uprising.

Kenji appears in several challenges in the Pacific region.

Kenji and Shinzo trade their honor in a deadly duel, and they refuse to attack the FutureTech Commander unless he is attacked first. They thus weakened each other badly enough for the elusive commander to destroy them both.

It has appeared that Kenji is in charge of the supervision of the nanocores on this remote island. At the start of the battle he mocks the commander that he did not need to come to his base and let him come to the FutureTech Commander. It proved true; several Defender VX's were deployed directly in front of the FutureTech Commander's base. Alas, they were all destroyed along with Kenji's base.

He appears with Shinzo once again, and it appears that Shinzo will not attack the FutureTech Commander unless any of the 2 Kenji's base is destroyed. However they again were both defeated. (Even if Shinzo is attacked first, he will not retaliate. He only does if Kenji is defeated.)

In this battle he excessively uses Steel Ronins and Archer Maidens against the FutureTech Commander. The Steel Ronins managed to do their job before ultimately being destroyed.

Kenji has several rampaging King Onis breaking through the city walls and right toward FutureTech Commander, although they were easily destroyed long before they breached the inner walls. The same army then defeated Kenji once again in this Mongolian region. It also appears that a greater King Oni was also detected moments before it too was defeated.

Kenji and Shinzo are training Shinobi in this area but are soon discovered by Moskvin and the FutureTech Commander. Kenji then asks the commander if he doesn't mind a little "infiltration" in [our] base. Moskvin also teams up with Kenji and Shinzo, but is (sadly) the first to be defeated due to his excessive usage of Terror Drones.

Kenji and Moskvin team up, attemping to level FutureTech's stronghold in the area. The commander is thus given 4 MCVs (one for each of the factions, plus one more) to fight off both invaders. More than one MCV was destroyed before FutureTech had really defeated Kenji and Moskvin.

Kenji's mastery of the Empire's advanced technology can not be equaled. An enthusiastic commander with a modern attitude to warfare, he prefers using vehicles over infantry in battle. Any commander facing him on the battlefield should be prepared to deal with waves of Tsunami Tanks and various transforming vehicles, as well as heavier, more advanced weaponry.

Kenji in Red Alert 3
Add an image to this gallery 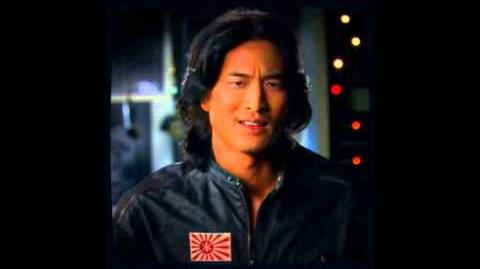 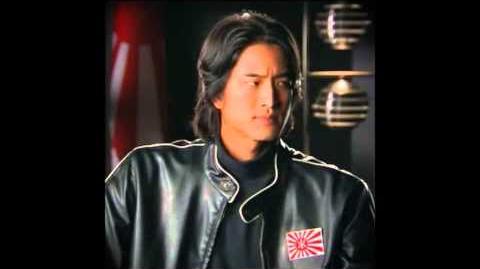 Retrieved from "https://cnc.fandom.com/wiki/Kenji_Tenzai?oldid=231562"
Community content is available under CC-BY-SA unless otherwise noted.