Manufactured by Vervack, the AG79 K1 automatic grenade launcher1 fires its rounds in an arc. It is fed from an eight round detachable drum magazine and allows for a high rate of fire with its semiautomatic action.

Although difficult to wield, it is useful for harassing infantry in tunnels and can be used against vehicles effectively, to an extent. It is also very useful for getting rid of Visceroids, as only 2 direct hits take one down.

Alongside the Merlin Personal Ion Cannon, the Grenade Launcher is never used by any enemy, being a GDI exclusive weapon. This means it is one of the hardest to find weapons in the campaign. 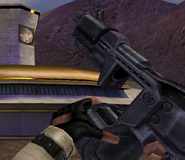 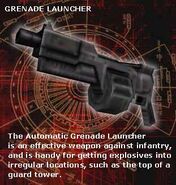 Retrieved from "https://cnc.fandom.com/wiki/Kestrel_grenade_launcher?oldid=150029"
Community content is available under CC-BY-SA unless otherwise noted.