The King Oni was a heavy anti-armor walker developed by the ERS during War of the Three Powers.

Out of all the bizarre tech the world's armies have deployed onto the battlefield, none have come close to the absurdidty and sheer intimidation capabillities as the Empire's own King Oni. Secrets of the King Oni's design are kept highly secret by Kurikara Robotics  and Imperial Commanders, the latter of which may only be granted access to construct them in the field with the highest permission.

Due to the high cost of the original design, currently known as the Greater King Oni, the empire's scientists worked on a more cost efficient and mass producible version for the imperial war machine. It remains unknown why the Japanese military was compelled to design such an unorthodox fighting machine such as this humanoid-shaped construct, which stands approximately six stories tall and evokes images of a mechanical, hulking ogre. However, battlefield performance reports of this vehicle are very sobering, and suggest that its bizarre form factor is not merely a play against enemy morale. Indeed, the King Oni's combat capabilities alone are more than enough to dampen an opposing army's spirits. Several King Oni walkers are typically called in when heavy firepower is needed the most.

The King Oni is a heavily armoured battlewalker that mainly attacks by shooting lasers through it's "eyes" and requires Mecha Bay Breakthrough to build. Though it's armour is ultimately inferior to both the Apocalypse Tank and the Future Tank X-1, it is one of the fastest tier 3 vehicle in the game and capable of taking on the Future Tank toe to toe assuming it does not use it's Riot Beam.

In terms of firepower, the King Oni is equal the Soviet Apocalypse Tank, but will still lose to it in one-on-one fight because the King Oni has a somewhat slower animation when it starts to attack and has less hitpoints, though the Apocalypse Tank will still lose nearly all but a sliver of its health in the fight. If the Apocalypse Tank uses its Magnetic Harpoon, it will win with much greater ease. The King Oni is faster, however, so Soviet players must be aware of flanking by the King Oni. It must be noted that in term of mobilization, the Allies' Assault destroyer wins due to their amphibious nature and their grip over the Chronosphere.

Like all units of its class, the King Oni is easy prey to Natasha's Badger Squadron Bombardment and her special ability to neutralize pilot assisted units, as well as the bribe ability of Allied Spies. A Terror drone team's special ability, the Tesla trooper's secondary mode, an Aircraft Carrier 's EMP Missile, and a rogue Rocket Angel 's Paralysis Whip can immobilize the vehicle.

The King Oni can get overwhelmed by swamps of anti-vehicle infantry and has no real counters to aircraft on it's own, requiring escorts to cover those weaknesses.

In the Allied Campaign, it is first seen on the Rock of Gibraltar and is destroyed by Tanya. They later (unsuccessfully) defended the Floating Fortress in the North Sea, and the Empire's military installations in Tokyo.

In the Soviet Campaign, it was a formidable foe, rivaling the Apocalypse tanks, but was easy prey for Twinblade helicopters, which rained bullets and rockets on it. Hammer Tanks were no match for them. V4 Rocket Launchers and Dreadnoughts easily destroyed them before they could react. First introduced by Tatsu during the Soviet reoccupation of their naval base, they become a staple of Empire's heavy, but crushable army. Terror drones could tear them into pieces from the inside and, of course, whenever a Kirov caught up to one (which was very unlikely), a few bombs ended its reign. Yoshiro had a modified King Oni which could shoot down air units with missiles but even this mighty titan went up in flames when destroyed by Apocalypse Tanks and Twinblades. Soviet Commanders also admit its Bull Rush made the walker a devastating foe. The Magnetic Harpoons and grinders of an Apocalypse Tank can very rapidly reduce the very expensive King Oni into nothing more than scrap metal, as can, of course, the grinders of the Grinder Tank. Should a Hammer Tank succeed in dismantling it with its magnetic weapon, the Hammer Tank will gain the King Oni's head on its left side which shoots the Oni's beam.

In the Imperial Perspective, the King Oni's first deployment into active combat duty is to assist not one, but two Yuriko Omegas, one presumed a clone of the Empire's Psychic Commando, in holding off the Soviets and Allies at Yokohama Bay in Operation: Barbarians in the Bay, before the counterattack was launched, pushing back both the Allies and Soviets. In the final mission, two elite King Onis were ordered by the Imperial Commander to destroy the FutureTech Lab in Amsterdam after it unleashed an as-yet-unknown superweapon as a last resort, destroying both Imperial bases, Allied survivors and the remaining Soviets. As the war ended in an Imperial victory, a King Oni was reported to be using its Radiant Eyeblasters to eliminate the flags of the now-defeated Allied Forces, replacing them with Imperial Standards as grim reminders of just how far the Empire of the Rising Sun will go to drown any enemy, who dare oppose their Divine Destiny, in their own blood.

In Commander's Challenge, the King Oni can be unlocked in a mission called "Gosh Darn Mongolians"

Battlefield reconnaissance has revealed at least these facts about the King Oni:

• Radiant eyeblasters -- Enemy armor is no match for the King Oni's energy weapons. And anti-armor infantry divisions would have to be very brave to approach the crushing arms and legs of this monster. As a small consolation, the King Oni seems to be unable to counterattack against an airborne assault.

• Bull rush -- The King Oni can reportedly charge straight through enemy ranks, demolishing formations and leaving any survivors in complete disarray. This attack seems hopelessly destructive, yet is rarely used, as if the King Oni depends on replenishing some sort of internal energy supply in between rushes.

• Impenetrable armor -- Modern anti-armor weapons seem ineffective against the King Oni, which seems able to withstand many times more punishment than a typical main battle tank. Stopping it would likely require an intensely concentrated attack of some sort.

Emperor Yoshiro possesses the original King Oni that only he himself is allowed to pilot.

This King Oni has missile pods for AA-purposes, which possessed an extremely high rate of fire, giving it a very effective AA defense so much so that a Kirov airship surprisingly stands little chance against this King Oni variant (this means that unlike the normal varieties, it is better to use a ground attack than attack it from the air), upgraded armour and Rising Sun insignia all over it. Its lasers were also more powerful than any standard King Oni faced thus far.

Likely as the original prototype and the personal machine of the Emperor, no expense was spared in its creation and maintenance. From his final transmission to the Soviet General, it appears that the Emperor was bionically linked with the machine, suggesting that all King Onis have some sort of cockpit and allow the pilot to move as if it were their own body (which explains the humanoid appearance).

Although Emperor Yoshiro was thought to possess the only one, another was seen under the command of Kenji during Commander's Challenge along with several other normal King Onis. It was destroyed by the Futuretech Commander.

One can take down a Greater King Oni if they're lucky by using Natasha's Snipe Pilot Ability, immobilizing it in the mission To Tame a Living God and Gosh Darn Mongolians!

The Greater King Oni is buildable in the Red Alert 3 Mod Shock Therapy.

During the Allied Campaign in Osaka, Commander Kenji's modified King Oni appears, housed inside his luxurious estate. He uses it as a last resort to fight the Allies along with a small battalion of his men. When his estate is destroyed, he unleashes his modified battle walker with a reverse-engineered Tech inhibitor from the Allies, which disabled the usage of practically every unit and structure of the Allied Commander's arsenal.

This variant has a different color scheme; mainly black and yellow with the usual red sunburst insignia of the Empire on its shoulders. He also modified its energy weapons to fire with more power, capable of killing with as much force as a veteran King Oni.

The initial design of the King Oni 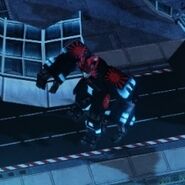 In Empire of the Rising Sun ending 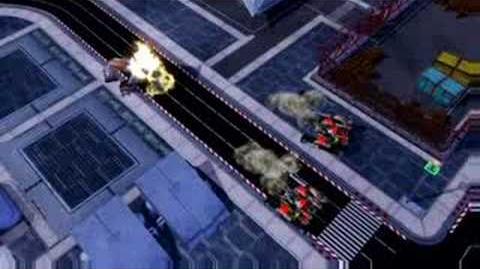 Retrieved from "https://cnc.fandom.com/wiki/King_Oni?oldid=231053"
Community content is available under CC-BY-SA unless otherwise noted.