The Kirov airship is a massive bomber zeppelin used by the Soviet Union, first seen during the Third World War.

These massive zeppelins are the aerial terror of the Soviet force, capable of dropping massive payloads of bombs that tear into enemy structures and decimate nearby units as well. During the initial stage of the Soviet Union's invasion of the United States, a massive fleet of Kirovs entered US airspace from all sides.

In the Allied campaign they were only encountered in mission Chrono Storm where they attempt to level the chrono shifted allied forces.

In the Soviet campaign they were first made available on mission Red Revolution where they appear both as the commander's and Yuri's main air unit. In Polar Storm, three were seen available after the commander captures the local airport.

By far the heaviest and most destructive weapon in the Soviet arsenal, the Kirov can take down even the hardiest land units with just a few bombs. It is also the slowest vehicle in the USSR's employ. Thus, while it can take down an entire base on its own, it can be destroyed, as its low speed allows opponents to effectively target it with anti-aircraft weaponry against which the Kirov can't defend itself fast enough. The Kirov can self-repair.

Any effective assault using Kirovs should bear in mind that while these airships have extremely tough armor, they are not invincible. When attacking, do NOT bunch them up together; they'll take massive damage and splash damage from Flak Tracks, Flak Troopers, and Sea Scorpions. The units mentioned inflict area of effect attacks on all air targets. Also, make sure they do NOT attack just a single target. An effective tactic is to try attacking different targets, on multiple fronts as this can confuse the enemy response.

While extremely resistant, and has destructive firepower, Kirov Airships are dramatically useless for guard duties. They will only drop their bombs when the target is directly underneath, meaning that by the time the bomb reaches the ground and explodes, the hostile unit went far away, therefore, force-firing the ground is a favored tactic.

It would be advisable to destroy all air defenses such as Patriot Missile systems, Flak cannons, and Gattling cannons before sending in Kirov Airships. Also beware of enemy units inside their base: Allied IFVs, Rocketeers, Soviet Flak tracks, Flak troopers, and Apocalypse tanks defending inside the base will make short work of them.

Kirov Airships are known to significantly damage or destroy enemy units due to its death crash. This is unconventionally effective against anti-air units (i.e. IFVs) grouped too close together as the Kirov Airship is shot down by them.

In skirmish, the AI occasionally sends out 1-3 Kirov Airships as a wave to destroy the enemies' base, depending on their difficulty (None for Easy AI, 1 Kirov for Normal AI, 3 for Brutal AI). They will always prioritize any production buildings, especially the Construction Yard before moving on to destroy the rest of the base. This can be exploited to bait them by continuously constructing cheaper production buildings such as Barracks and Naval Shipyards away from more important structures in order to buy more time to destroy the Kirov fleet.

Kirov Airships are one of the most powerful Soviet units in the game, and as such it can be difficult to defend against them. Multiple large air defense systems like allied Aegis Cruisers and/or Elite IFVs are critical for success against Kirov Airships. Rocketeers are effective against them as well.

A battalion of 5 IFVs/Flak Tracks/Gattling Tanks can use the hit and run tactic. They can open fire on a Kirov Airship and when the Airship is about to reach them, the battalion will move to a safer location and open fire again. The cycle would repeat until the Airship was destroyed.

After the Psychic Dominator Disaster, the Soviets introduced a new design of their Kirov airship. It was still powerful, but more vulnerable to anti-air defenses.

After Cherdenko's trip to 1927, Kirov airships were modified and somewhat less heavily armored than their predecessor, but were still able to sustain a great deal of damage. Also, they were slightly faster, and didn't have to alter their height to be in position to bombard. 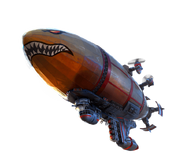 Retrieved from "https://cnc.fandom.com/wiki/Kirov_Airship_(Red_Alert_2)?oldid=240109"
Community content is available under CC-BY-SA unless otherwise noted.