Kirov Airship is a massive Soviet aircraft used during the Third World War. It is a Soviet icon and one of the most feared units in the Soviet arsenal.

Highly destructive and able to repair itself, should it sustain damage, the Kirov Airships of the new timeline is very similar to its previous iteration, right down to its famous shark mouth markings on the nose. Although somewhat less heavily armoured than its predecessor, this version of the Kirov can still sustain a great deal of damage. While somewhat faster than its predecessor, it is still abysmally slow, although this can be mitigated to an extent using the Gastroburners (see below).

The Kirovs are deployed from Airfields. They cost $2500 and also require the construction of a Battle Lab to enter the battlefield.

The unprecedented new Kirov Airship symbolizes the Soviet military's sheer size, strength, steadfastness, and, some might say, its propensity for excess. Named for its maiden launch over Kirov Oblast, this dirigible is specially-built for war. A rigid, unbreakable titanium compact frame and heavy-duty envelope make the massive vessel virtually indestructible, and its over sized cargo hold packs thousands of armor-piercing bombs, while an industrial-strength engine block and maneuver props somehow keep the thing aloft. By contrast with some other more-conventional Soviet forces, no expense was spared in either the design or the manufacture of these flying behemoths. Krasna Aerospace introduced the Kirov into the Union's arsenal only two years ago, and already it has changed the way modern air combat is waged, while silencing critics who once accused Krasna's past success with its Twinblade gunship to be a one-time fluke.

Given its pure role as a heavy bomber, the Kirov's only real shortcoming is its inarguable lack of speed—a problem that is partly resolved by the Kirov's posh living quarters and spectacular panoramic viewports, which let their prestigious pilot-bombardiers blissfully pass the time while their aircraft steadily trudge along toward their unfortunate targets. Along the way, Kirovs are able to simply shrug off most anti-aircraft fire, including attacks from enemy fighters. It is true, though, that Kirovs have no means of retaliating against enemy aircraft, so the Union does tend to send escort fighters of her own to watch over each mighty vessel, just in case. Further, Krasna Aerospace has equipped this year's Kirov models with special fuel injectors that provide the airship with a significant burst of speed, though this is used sparingly for safety reasons.

Of course, the greatest safety concern lies with the Kirov's enemies. Even but one such gigantic vessel has within it the capacity to bring ruin to an entire military installation or enemy armour division. As if this weren't enough, recent reports claim that the Soviet Union is now exploring new ways of mass-producing Kirovs in an offshore plant, while fitting them with even more powerful munitions. Such reports may well be false. For example, there is simply no physical way a Kirov could be built from a Soviet war factory, despite insistent speculation that one of these tank plants—so common on the Soviet front—has within it the capacity to launch aircraft.

Predictably, Kirov Airships are flown only by the most decorated Soviet officers with years of good political standing, who enjoy lavish accommodations and fine dining inside the Kirov's 200-square-meter living quarters. Even so, stories abound about the ruthlessness of Kirov pilot-bombardiers, who—if the psychological profiling is to be believed—are so impatient for combat yet feel so removed from it that they tend to use their bombs with liberal, merciless abandon.

As mentioned above, the Gastroburner is the special ability for the Kirov which allows it to use a new volatile compound to propel it at much faster speeds. The compound damages the Kirov, however and slowly eats away at the structure. Prolonged use will eventually destroy the Kirov and the ability should be used sparingly. It still doesn't give the Kirov enough speed to outrun fighters, however. In game, a Kirov Airship at maximum health can use the Gastroburners for 30 seconds before it destroys itself.

The Kirov is the Soviet's Heavy Bomber. This airship proves to be a rather devastating offensive weapon against infantry battalions and bases, especially the former. Unlike the Allies' Century Bomber, the Kirov enjoys a near-endless bomb supply and an efficient means of locomotion, making refuel and rearming stops, a thing of the past.

When the airship eventually reaches its target, the ruthless captain can begin a slow-creeping carpet bomb towards their unfortunate target. Unless its prey is somewhat stationary or oblivious to its vast approach, it will be quite literally blown from the face of the earth.

Rather than its overpowered strategy of bombing any structure to kingdom come, the bombs cause an enough explosion to topple infantry who have somehow escaped the initial blast. Although it goes for saying that nothing can literally outrun a Kirov once the pilot begins their proud and blood-thirsty goal of utterly pulverising their target.

This sheer resilience and firepower includes a hefty weight which makes the Kirov sluggish and hard to manuver. Even so that fast and nimble units, such as the multigunner IFVs and rogue Bullfrogs will be nothing more than nimble rats that can also bite back. It has a better chance against stationary and slowing moving targets, it has literally no defense against air superiority fighters. Though this is compensated by it's capability to shrug most enemy fire; Plenty of time for a squadron of friendly fighters to arrive and deal with whatever situation, the airship has gotten into.

Kirovs were deployed by General Krukov in the final wave of the ultimately failed attempt to invade Brighton Beach and were modified to carry 50 megaton thermonuclear bombs (which evidently was only recently developed, due to Einstein being erased from the space-time continuum) in a planned attack from Havana against major Allied cities, but Allied Apollo Fighters shot them all down before they could reach the mainland. They were launched from modified sports arenas and were only stopped once all the arenas were destroyed. Due to the airships' inability (because of low speed) to safely clear the blast zone of a 50 megaton nuclear explosion, they were probably drone-piloted and programmed to detonate their thermonuclear cargo once they reached optimum altitude for airburst nuclear explosion over an Allied city designated as a target.

The Kirov was first granted to the Soviet Commander during the invasion of Von Esling Airbase, Iceland, after General Krukov was accused of attempting to murder Premier Cherdenko. Kirovs were also used against Cherdenko's volcanic fortress at Easter Island after the Premier in turn betrayed his commanders. They too spearheaded the invasion of New York, destroying Fort Bradley, in the final operation Blight on the Big Apple.

In the Imperial Campaign, they were used to try to destroy the Shogun Executioner, and were a very dangerous threat to it that had to be guarded against by Striker VXs and Jet Tengus. They were also used in an attempt to defend the Kremlin from invading Imperial forces but were shot down.

Battlefield reconnaissance has revealed at least these facts about the Kirov Airship:

• Luxury at a premium -- Kirov Airships are new and in high demand, and therefore in short supply. While increasing numbers of Soviet airbases are being given authority to manufacture these dirigibles locally, this process is time-consuming and expensive.

• Limitless bombs -- In spite of the huge size of the Kirov, it fits only a small number of individuals. Although it could conceivably carry hundreds of passengers, it instead holds thousands of bombs—more than enough for any single battle.

• Gastroburners -- Kirov pilots have access to a special chemical compound that, when released into the engine block, causes the mighty airship to reach a greater-than-usual top speed. The drawback is that the compound is toxic, and slowly corrodes the Kirov from the inside.

• Explosive Potential -- While no Kirov has ever been shot down according to official records, physicists theorize that the volatile chemical compound and sheer number of bombs contained within these vessels would likely explode catastrophically in the unlikely event one should ever fall. Be prepared to move your units out of the blast zone otherwise they get caught in one massive bang! 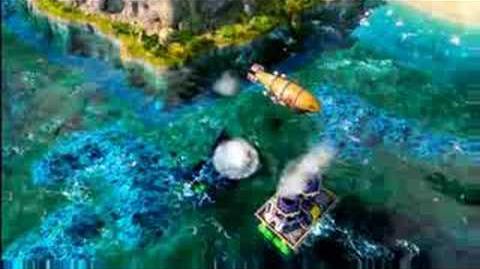 A Kirov with active gastroburners

Kirovs under attack by Allied Hydrofoils.

In unit profile
Add an image to this gallery

Retrieved from "https://cnc.fandom.com/wiki/Kirov_Airship_(Red_Alert_3)?oldid=229262"
Community content is available under CC-BY-SA unless otherwise noted.