The Kodiak (also known as the Orca Command 3A) is an airborne mobile command center that was used by the Global Defense Initiative's commander Michael McNeil during the Second Tiberium War.

The Kodiak is one of GDI's Orca Command Vehicles, large VTOL aircraft carriers that function as mobile command centers for their field commanders. Capable of entering into low Earth orbit, the Kodiak contains facilities to transport and provide tactical support to GDI's troops, including armories and medical bays. It also has a large cargo bay located in the rear section of the ship, with an access ramp located between the aft engines.

The Kodiak is used by Commander Michael McNeil as a field command post and to transport him and his team across the globe. His reliance on the craft almost became his undoing however, as during a particularly violent ion storm, it was grounded; a fact the Brotherhood of Nod quickly sought to use to their advantage. However, McNeil's forces defended the Kodiak against Nod's onslaught and succeeded in neutralizing the Brotherhood's forces in the area.

At the beginning of the Firestorm Crisis, the Kodiak was assigned to transport the Tacitus device from the Nod pyramid in Cairo as part of Project Daedalus. Chandra commanded the flight. The ship took off from the pyramid to the GDSS Philadelphia heading north by north-west and into a nascent ion storm.

The Kodiak crashed in northern Egypt on the Mediterranean coast after its starboard engines were destroyed by a lightning strike. The bow section separated on impact. A Firestorm task force team found no survivors but recovered the Tacitus intact from the aft section. For reasons unknown, Michael McNeil was not aboard during the incident. 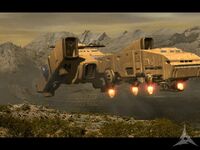 The Kodiak taking off 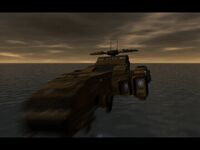 Flying over the ocean

Grounded by an ion storm

The Kodiak seen in the Weather The Storm mission (Tiberian Sun) 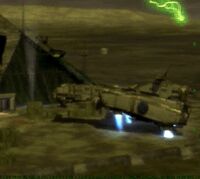 Landing at the Nod Pyramid in Cairo 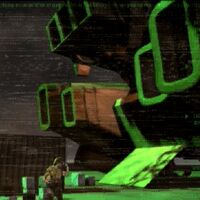 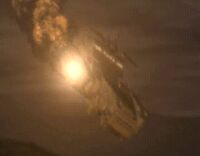 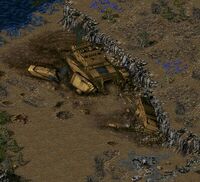 The model of the Kodiak was used in the 2004 remake of Battlestar Galactica for one of the vessels of the refugee fleet.

Retrieved from "https://cnc.fandom.com/wiki/Kodiak_(Tiberian_Sun)?oldid=242668"
Community content is available under CC-BY-SA unless otherwise noted.