The Kodiak is a heavy battlecruiser available to the Support Class of the Global Defense Initiative during the Ascension Conflict.

With the original Orca Command aircraft mothballed by GDI Council, the Initiative was left without any large aircraft to guard the skies. It wasn't until the aftermath of the Third Tiberium War that this decision was reconsidered. Scrin Devastator Warships and Planetary Assault Carriers were powerful enough to devastate even the strongest GDI bases with ease, as the smaller aircraft like Firehawks were simply not powerful enough to bring them down fast enough.[1]

When the Relay Node was destroyed and GDI started rebuilding, the need for large scale air superiority aircraft became evident. With the TCN construction underway, the Council was able to reallocate resources needed to set up the initial construction efforts and pool them into the development of new aircraft capable to standing up to their Scrin counterparts.[1]

It took six long years of on-and-off development, but in 2068, GDI unveiled the foundation of their space fleet, the Kodiak-class battle cruiser, named after Michael McNeil's legendary command vehicle. However, the name was about the only thing in common the two ships had - unlike its command-oriented predecessor, the new Kodiak is a warship first and foremost, armed with nine 24" guns grouped into three turrets with a compliment of Vulcan cannons for anti-air defense.[1]

Its first deployment came in 2069, when the GDIS Michael McNeil destroyed fortified Obelisk defenses surrounding a key Separatist base in Africa, allowing GDI groups to secure the area with minimal casualties.[1]

The Brotherhood of Nod has quickly come to fear these large heavy capital ships due to the firepower they were capable of bringing on the battlefield.[2] In fact, high-ranking Nod commanders even considered at one point phasing out their infamous Obelisks of Light since it was, at the time, unable to target air units.

In recent years, Kodiaks are being upgraded with power redirection circuits and Lightning Armor to improve their survivability. The armor strengthens itself proportionate to the electric current that is passed through it; the helmsman can engage power redirection circuits to activate the armor by rerouting primary power from weapons systems. Some of this power is also routed to the engines to grant the Kodiak a speed boost.[1]

The Kodiak is such a powerful GDI unit that a small fleet of them acts as the last line of defence of the GDI government district of New Adana.

The Kodiak is armed with nine 24 inch (610 mm) long-range heavy artillery guns grouped into three turrets. These are capable of obliterating any target on the ground, however, their downside is that they are incapable of turning quickly and turrets at the ends of the ship do not have a 360 degree firing arc. Additionally, an array of Vulcan cannons against light aircraft is mounted on the top side of the ship.[1][3]

Kodiaks can also activate their Lightning Armour, engaging in defensive maneuvers which dramatically increase speed and durability but disable its weapons.[1]

The Kodiak is the last unit to be unlocked for a GDI Support commander (at Level 20). It can only be built once the commander has gathered enough upgrade points to reach Tier 3. It is the biggest and most expensive unit of the Support Class and its main role is long-range bombardment of enemy defensive structures and clusters of units. Its 3 artillery turrets on the underside that deal blast damage that is very effective against reinforced structures and decimating clusters of small units. The artillery turrets also outrange all known defensive structures. The turrets, however, cannot be brought to bear on aircraft. To remedy this, the Kodiak is also equipped with another 3 air-to-air gun turrets mounted on the topside. These turrets can only target aircraft, but are very effective against light aircraft such as the Venom.

The Kodiak has very heavy armour that is impervious to bullets and resistant to rockets, but is very weak against lasers, especially against Basilisks. It is one of the most resilient aircraft in the game, with 1600 hp, surpassing any other buildable air unit in game, including the Nod Leviathan.

Kodiaks can be upgraded with the Defensive Maneuvers ability. When this ability is activated, it dramatically boosts the Kodiak's armour and speed, but disables all of its weapons temporarily. The ability also grants an armour bonus to all nearby friendly units.

Kodiaks are too large to be constructed in the GDI Support MCV. They normally cruise at high altitude, waiting to be requested by a sufficiently high-ranking GDI Support Commander, similar in nature to the Hammerhead.

The Kodiak's Nod equivalent is the Leviathan. It's primary advantage over its Nod counterpart is that it can attack air units, which the Leviathan cannot. The Leviathan has a significantly better ground attack, however.

An achievement can be earned if the player uses it to destroy several units with the Kodiak.

Kodiaks standing by in New Adana 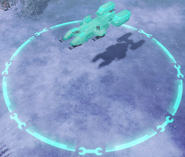 Retrieved from "https://cnc.fandom.com/wiki/Kodiak_(Tiberian_Twilight)?oldid=230567"
Community content is available under CC-BY-SA unless otherwise noted.