The Lasher Light Tank was the main battle tank of Yuri's forces.

The Lasher, like most of Yuri's units, was mounted on a narrow chassis. Unlike most of Yuri's vehicles, the Lasher was a conventional tank. Mounted on the top was a light cannon, fairly effective against vehicles and buildings, but ineffective against infantry. The Lasher was equipped with a frontal drum-shaped, spiked cylinder, designed presumably to remove sandbags. However, the Lasher was indeed a light tank, and could not stand much punishment - yet was equal to that of an Allied Grizzly. The Lasher, like most Yuri vehicles, could enter a tank bunker to supplement its weak armor. Due to its fairly low price, it was easy to mass produce and overwhelm the more expensive tanks of the Soviets, an advantage that was negated if their enemy was equipped with an Industrial Plant.

The Lasher was erased after the Soviets meddled with the space time continuum.

The Lasher is the same as the Grizzly tank, except the Lasher's gun projectile moves faster.

Like most conventional tanks, the Lasher light tank is vulnerable to all air units, and to uncrushable and anti-tank infantry, such as Tesla troopers, Guardian GIs and rogue Brutes. Lasher tanks could also be mind controlled by rogue Yuri Clones. In addition, it was Yuri's only dedicated anti-armor vehicle.

Keeping these rather frail tanks alive is considerably more difficult as Yuri does not have access to a buildable repair facility. In turn, it is more vulnerable to Terror Drones.

Therefore, for all of its disadvantages, it was essential for Yuri's commanders to keep a division of these tanks not only for protecting their vulnerable mind-control units, but to defend their bases from enemy tanks should the base's mind control defenses fail.

In the data files, the Lasher replaced the Light tank (Red Alert 2). 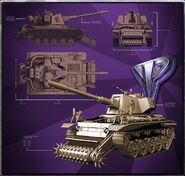 Retrieved from "https://cnc.fandom.com/wiki/Lasher_tank?oldid=234922"
Community content is available under CC-BY-SA unless otherwise noted.