Liberation is the third mission in the Chinese campaign of Command & Conquer: Generals Zero Hour.

Following the fall of the GLA forces at Stuttgart, the terrorist organization infiltrated Chinese borders once more and attempted to blow one of China's major nuclear reactors. The plot failed though, and with its borders secured once again, the Chinese military focused their efforts of cleansing the GLA from Europe. By this time, the world was watching China's movements and the GLA had placed victory statues around the German town of Coburg. World opinion became critical for the eastern superpower if the Chinese government wanted the world to embrace the nation as the leader of a new world order. Otherwise, the GLA will be accepted as liberators by the peoples of Europe.

﻿Toppling the GLA's victory statues became critical if the world wants to lends its fullest support to China. In what is to become a propaganda war, the Chinese inserted a strike team just beyond the town. Unfortunately the city was littered with GLA units and their Stinger Sites and Tunnel Networks were camouflaged to blend in to the town environment. The Chinese strike team nevertheless relied on their Listening Outposts and Troop Crawlers carrying stealth detectors and took out all camouflaged units with relative ease. The statues themselves were systematically destroyed by the strike team, and world opinion climbed sharply in favour of the Chinese forces.

Note: Opinion would decrease at a slower rate after Speaker Towers are installed.

The Chinese secured the town itself, until only one statue remained across the river and in the mountains. This statue however was flanked by two heavily defended GLA bases, and the GLA would not allow the Chinese to destroy this last statue. Just by holding out long enough would mean the Chinese was too slow to liberate the area and world support will turn to the GLA instead. Previous carpet-bombing runs by the Chinese missed its target (the statue) twice, giving the Chinese forces no choice but to blast their way through. After crossing the river at one of the bridges, the Chinese had forced their way through the GLA units and Stinger Sites but not taking out the Arms Dealer and Barracks. They made their way to the statue under heavy GLA fire and sustained many casualties. Nevertheless, the Chinese managed to destroy the last statue.

﻿The toppling of the last GLA victory statue resulted in world opinion turning hugely in favor of China's stand in Europe. World support for the GLA became non-existent and the terrorist organization became demoralized after each successive defeat in Europe at the hands of the Chinese forces.

Initially,use Hackers to build funds and forces. Beware of GLA Rebel Ambushes,make a mobile defense available in the base. Then build a force enough to overrun the GLA. Use Troop Crawlers to sniff traps, and the Chinese armor to counter GLA's forces in the village and guarding the GLA's Statues in the town. Be careful though,that the GLA uses camouflage and SCUD Launchers against you. There are also Tech Structures near the village,guarded by GLA. Eliminate them and capture it. You can optionally capture the GLA Arms Dealers and Barracks on the village outskirts,near the bridge.

In order to destroy the last statue, force a mixture of Chinese and GLA forces and destroy the defenders,capture or destroy the bases and eliminate the last line in the Statue's location. Then destroy the statue. 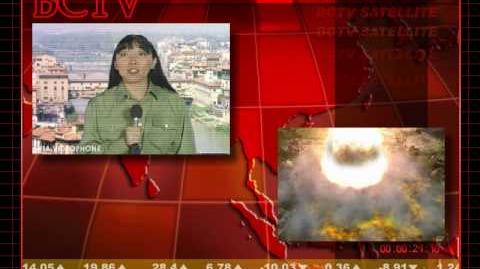