The light tank is the basic armoured vehicle of the Brotherhood of Nod in Renegade.

In a departure from Nod's standard light tank, the new vehicle boasts a lower profile, a new four-tread movement system and a better mounted turret.

The light tank is the third cheapest vehicle in the game, with a cost of 600 credits. With 300 points of both health and armor, it's able to withstand a fair amount of damage. It is also faster than GDI's medium tank, making it better at dodging projectiles and retreating away from certain defeat.

Even so, the light tank can still be easily overwhelmed in battle, especially when fighting by itself. As a result, it is most effective as part of a larger force. 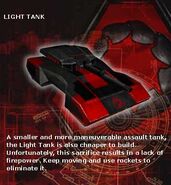 Light tank in Renegade database
Add an image to this gallery

Retrieved from "https://cnc.fandom.com/wiki/Light_tank_(Renegade)?oldid=222827"
Community content is available under CC-BY-SA unless otherwise noted.