The Lightning Spike is a stationary defensive structure that may be deployed by the Scrin at any battlefield location visible to them, as part of a support power, once the Nerve Center has been constructed. The Lightning Spike, as its name suggests, fires bolts of electricity at any enemy ground forces within range.

While it lacks the destructive power of the Storm Column, the fact that the Lightning Spike can be materialised anywhere makes it extremely useful for the harassment of enemy units, as well as a backup base defence and a useful distraction. As field encounters with this structure have revealed, it is most effective against lightly armoured targets and infantry units. It also does not require any power, as opposed to most base defenses.

It also shares the Storm Column's passive 'ability' to deflect some missiles fired at it making rushes with missile-firing units a little bit harder. 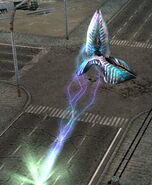 Retrieved from "https://cnc.fandom.com/wiki/Lightning_Spike?oldid=214781"
Community content is available under CC-BY-SA unless otherwise noted.