The Limpet drone is a hovering reconnaissance drone used by GDI and Nod that appears in Firestorm.

The drone deploys as a mine and waits for a target to pass over. The drone spot-welds itself to the underside of the target. Once attached the drone interferes with the electrical systems, usually resulting in a loss of speed, and relays terrain and tactical data back to its controller or designated radar facility from its sensor/camera device.[1]

Sensor systems can detect deployed drones, and the drones can be disabled by an EMP. Field repair units were modified to remove drones from affected vehicles.[1]

Drones are hover units and may move over water. When deployed they become stealthed but can be instantly destroyed by EMP. A drone may be removed from an affected vehicle by having the vehicle repaired at a service depot or by a mobile repair vehicle; the drone is subsequently removed from play. 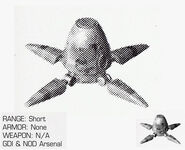 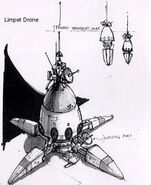 Retrieved from "https://cnc.fandom.com/wiki/Limpet_drone?oldid=241313"
Community content is available under CC-BY-SA unless otherwise noted.